Does Kansas City Need Another Entertainment District?!? Even If It Has A Ferris Wheel?!? 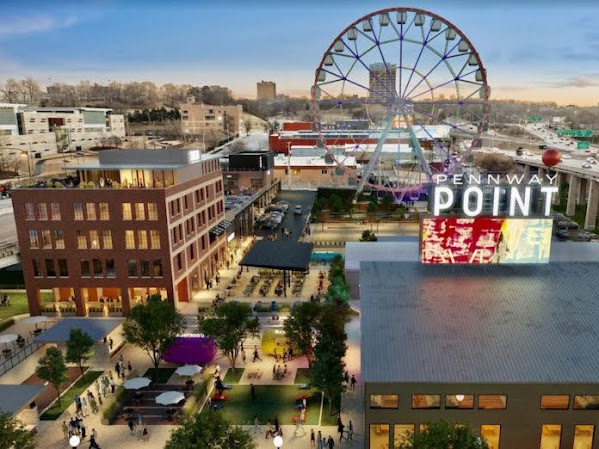 Admittedly, the idea seems kind of cool . . . But, as with all things, it likely needs TONS of taxpayer support.

Here's the plan and a realization that the cool sketches might not draw private investment . . .

3D Development thinks their Pennway Point Project proposal is what Crossroads needs. The project would be built on an industrial space next to Interstate 35 on 25th Street. Wullschleger says the site will serve as an entertainment district with volleyball courts, big screen TVs, yard games, shops, food and a 170-foot Ferris Wheel.

“We're taking a space that previously generated a really low amount of property tax and turning it into a spot that will generate a lot in sales and property tax for the future,” Wullschleger said.

3D Developments plans to incorporate the site’s rich history into the project. It is in the process of renovating empty buildings that were built in the 1900s so its roots won't be forgotten.

“The original building on the property was built in 1908 out of brick to support, the upcoming Union Station,” Wullschleger explained.Maggie Green, Media Relations Manager for the city of Kansas City, Missouri, says the city is still reviewing the high-level concept proposal but says the project follows current zoning, so there's no need for a planning proposal.

KANSAS CITY, Mo - The Kansas City skyline could be changing within a year thanks to a new proposal that would add a Ferris Wheel to the Crossroads neighborhood. "It's about activating unused or underutilized space that needs new life and the Crossroads is one of the hottest neighborhoods in Kansas City, but what it lacks is that central gathering space," explained Erik Wullschleger with 3D Development.