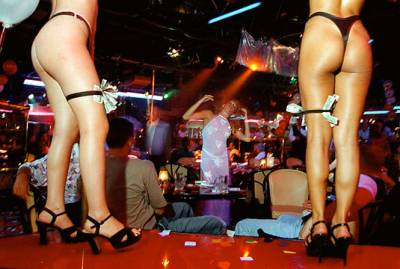 A hot mess at a strip club cost a senior citizen lady her life not so long ago in a tragic case of mistaken identity.

This week a jury convicted the defendant of Unlawful Use of a Weapon, Unlawful Possession of a Firearm and two counts of Armed Criminal Action.

According to court records, Kansas City police responded to Interstate 70 West near the Interstate 35 entrance ramp on a reported injury accident about 3 a.m. Jan. 16, 2019.

Police found the victim, Barbra J. Harper, 71, deceased. She had suffered a gunshot wound. Holes in the headrest of the passenger's seat appeared to be from gunfire. The driver's side window was broken, as well as a passenger side window. Spent shell casings were found in the roadway nearby.

Police detectives obtained surveillance video from city cameras and showed another vehicle speeding behind the victim's vehicle before the victim's vehicle swerves and strikes the guard rail. The vehicle speeding behind her vehicle exited onto Harrison Street from Interstate 70. Other video detected the sounds of two gunshots and showed the subject vehicle. Police determined the license plate number on the suspect vehicle and conducted surveillance on the residence associated with the plate. The defendant pulled into the driveway of that residence in what appeared to be the same vehicle.

While he was arrested, police found a 9 mm handgun in his waistband, another 9 mm under his armpit, a large amount of cash and an I-phone. Another handgun was found inside as well as three pounds of marijuana with scales and sandwich baggies.

During the investigation, detectives also learned of a disturbance and shots being fired near the Shady Lady on East 12th Street shortly before the homicide. Analysis of spent shell casing revealed they and those found near the homicide scene were fired from the same gun.

Detectives believe the victim's vehicle may have been mistakenly targeted by the defendant after the Shady Lady incident.

An Independence man has been convicted of second-degree murder and other charges in the death of 71-year-old Barbra J. Harper in 2019. Prosecutors say a jury found Dakkota Siders, 28, guilty of murder second degree, unlawful use of a weapon, unlawful possession of a firearm and two counts of armed criminal action.

KANSAS CITY, Mo. - Jackson County jury finds a 28-year-old Independence man guilty in the fatal shooting of a woman in her vehicle in Downtown Kansas City in 2019. The jury convicted Dakkota Siders of second-degree murder, unlawful use of a weapon, unlawful possession of a firearm, and two counts of armed criminal action.