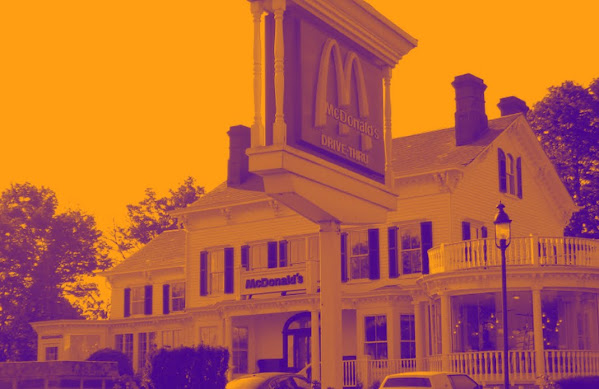 Of course he's taking aim at a controversial housing trend but he also provides more than a few EXCELLENT insights.

However, we respect his sage advice and share these words of wisdom from one of our all-time favorite commenters . . .

Once Upon A Time We Had Affordable Housing

You see the comment made a lot about affordable housing and about there not being enough of it. I see a lot of younger people who can’t afford to buy a home and seldom live alone in an apartment. I bought my first home in 1976 in the heart of what’s known as the Golden Ghetto. In 1976 your average loan interest on a new home or an older home it didn’t matter as you were looking at around 8 to 8.5% interest and it got worse than that at one point. Interest rates were 11% and more on a home mortgage a few years later. Sure we had to come up with a down payment and the wife and I did in cash in about six months working together that covered the down payment and closing costs. That was $3,100 dollars up front we paid for our home. I looked back at our original paperwork and we had a 30 year mortgage and our monthly payments included property tax and homeowners and mortgage insurance was $263 a month when we moved in.

In today’s market the average of what many claim to be affordable homes run $300-400,000 where a down payment now is more than I paid in 1976 for a whole house. Now think about this, how long it would take you to come up with $30-40,000 for a down payment and that’s just if you put down 10%, they’d much rather you put down 20% which would mean $60-$80,000 down payment. You can find places to move into and purchase for $150-$250,000 but you’re still going to have to come up with the down payment. Sure there’s been some first buyer stuff out there in the past for people to get help with under certain qualifications but that does not apply to everyone as a whole. Even then the first time buyer is looking to need a down payment in the area of 20 $25,000 minimum as a rule.

So yes housing costs are more than 45 years ago but show me how many 22-year-olds can go buy a house in today’s market like I did in years past. Yes I was only 22 years old when I bought my first house, my wife and I both had your average type jobs with health insurance we could afford along with some savings. But from the time we decided to buy a house till we moved in one was less than a year and neither one had any real savings as we were too busy having a good time running around.

I know a lot of young couples today that are in homes, nice homes some refer to as McMansions and I guess if you compare it to my first home they are McMansions but are so due to the family putting up sizable sums of money for them. When I grew up and for a number of years into the 70s and 80s families of five and six members lived in homes with three bedrooms, single car garage, one-bathroom, maybe a full basement, maybe just a half one. Then all of a sudden raising a family in a home like that was an atrocity. You are abusing your kids forcing them to share a bedroom as they become teenagers as they have to have their own space. I remember being told if I needed some space to go outside and get some fresh air. We grew up like that, we didn’t know any better and we all did just fine with most families being very close with one another.

One reason I believe for high cost of houses in our area is simply because everybody wants to live in a McMansion, a common fully functioning house is no longer suitable as their house has to be bigger than your house and they don’t want a little house in their neighborhood or want apartments in their neighborhood and hell yes keep those townhomes away from us they will drive the value of our house down. That’s the biggest crock of baloney I have ever heard. Your average family does not need a three car garage and if they do they have too damn much stuff that they obviously are not using so they have to shove it someplace in their 2000 ft. plus McMansion. One friend of several who are a real estate brokers sold a house to a couple who quickly got in over their heads with new cars, boat, maxed out charge cards and the likes due to trying to keep up with the neighbors in McMansionville. They reached out to my friend again to see if they had enough equity in their home to sell it and downsize a little bit maybe and pay off their bills of which he was able to help them do. Some months later the same thing is happening again. He steps in and shows them what they’re going to have to do to not be in bankruptcy and to save their credit. Of which the wife of the couple replied, ” I will not relocate from Leawood to west Lenexa.”   Okay!

Our local housing market has been thrown upside down mainly due to McMansions that a vast majority of the population does not need but that’s about all that’s out there unless than want to buy an older home and a lot of people don’t want to buy older homes because they don’t have the capability to do the upkeep that is needed on them so they have to pay to have it all done. They would rather buy a new home and avoid those costs for a number of years to come. Same reason some people will live in apartments rather than to deal with mowing the yard, fixing the roof or pushing the snow off. Same applies to townhomes and condos but you start talking about putting in townhomes and condos in a number of neighborhoods in Johnson County and they totally freak out as they don’t want that in their neighborhood. If you can’t afford a McMansion you’re not wanted here and for damn sure not welcomed as we have certain statuses in place that we aim to keep. These are the same people that will get out there and push for a lot of fair housing, Gay rights and any other civil rights types of things that you can think of until it comes down to those kind of things may be moving into their neighborhood or next door to their neighborhood. That right they want to control where you live completely. It's amazing how many housing developments want to tell the next housing development what they can and cannot do because they are so afraid you will affect their property values.

Property values around here just don’t drop as a whole, you can go to some of the worst sections of the metro area and be amazed at what the cost of a piece of property or broken down old house might be. But that’s based a lot of times on the surrounding areas. No I’ve never seen the price of anything go down when it comes to property values and homes. The tax assessor sure doesn’t think your house decreases in value and their right; they don’t even though they have a tendency to evaluate them higher than they have actually increased in value. The only time a piece of property will definitely be lower in cost is if there’s nothing developed upon it.

Life is a long-term investment, how you invest in it is up to you. If people stop buying the McMansions and demanded more of the type housing built in the 60s and 70s you would actually see a trend turn around to lower cost homes shy of say some bells and whistles in them and end up with a lot more cash at the end of the month because you have a lower mortgage payment, lower utility payments, lower tax payments and lower upkeep payments.