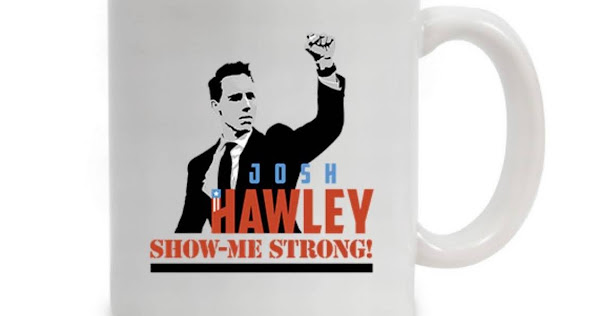 A question of copyright, fair use and politics confronts the Missouri senator . . .

News website Politico owns the photo that the Show-Me State Senator is defiantly using for fundraising.

However . . . We notice that there's a bit of a reworking of the image, additional text imprinted AND a change in context . . . We think there's a fair use argument to be made but, actually, this type of copyright dispute is common.

The Associated Press sued artist Shepard Fairey for use of an image of Prez Obama. There was eventually a settlement but only after the internationally renowned artist earned MILLIONS from his work.

The picture was taken by E&E News, which Politico bought in December. On Monday, Politico said it had sent a cease and desist letter and said: “We do not authorize [the picture’s] use by the Hawley campaign for the purpose of political fundraising, which the campaign has been put on notice of by legal counsel.

“We are eagerly awaiting a response, but in the interim again respectfully ask that the campaign immediately cease and desist unauthorized use of the image.”

A spokesperson for Hawley said: “We haven’t received any correspondence from Politico or anyone else, but we are in full compliance with the law. Perhaps Politico can show us the correspondence they sent to the many liberal groups who also used the photo.”

The Republican senator Josh Hawley must stop using an infamous picture of him raising his fist to protesters at the US Capitol on January 6 on campaign merchandise, the news site Politico said. The shot was taken on 6 January 2021 as Hawley, from Missouri, made his way into the Capitol for the certification of electoral college results in Joe Biden's victory over Donald Trump.