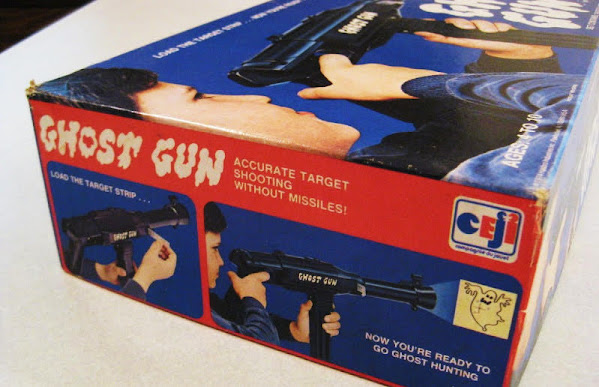 Cheeky denizens of the discourse will remember the old school toy from the 70s.

But even privately printed firearms are a familiar phenomena. However, nowadays procuring a lethal plastic weapon is so remarkably easy that it's a joke.

To be fair . . . The punchline is that getting a "real" gun is even easier and, actually, comes with fewer legal probs.

Fear of "ghost guns" dominated recent headlines and offered a brief distraction from a more oppressive and dangerous future that confronts the NEXTGEN and the rest of us . . .

The "threat" of ghost guns might be overstated given that 3d printing tech has mostly been dominated by hobbyists and all manner of crafting nerds who enjoy using new tools to thumb their nose at law enforcement OR, rather, to accurately demonstrate that technology renders old school thinking about "guns" nearly irrelevant.

"Ghost guns may be tied to two high-profile shootings in Johnson County, including one at Olathe East High School. Sheriff Calvin Hayden said he could not think of other instances where his officers had encountered that type of weapon."

What is a 'ghost gun?' What experts say about weapon used in Olathe East shooting

OLATHE, Kan. - What is a ghost gun? The ATF said they're guns that lack serial numbers to identify them, and they are typically assembled by the user. Law enforcement and AFT agents are concerned as companies send people - sometimes with little experience or ill intent - kits to put together these ghost guns.

Ghost guns - a term often used to describe homemade, untraceable guns - have caught the attention of Johnson County authorities after such weapons were allegedly used in two separate shootings there in recent weeks that resulted in three deaths and three injuries.

LEAWOOD, Kan. - Educators across the Kansas City community are reacting to Friday's Olathe East High School shooting that shook the district. Teachers say the fear of a situation unfolding at their own school is contributing to an ongoing crisis in public education staffing. Matthew Shulman teaches at Blue Valley Northwest.

Kansas City police and federal agents say that while it's tough to track ghost guns, they are currently seeing an uptick in their Midwest presence. It's a problem being highlighted in Kansas after a ghost gun was reportedly used in the Olathe East High School shooting last Friday.

A father used a ghost gun to kill his three daughters. It's a sign of a growing crisis

California man who shot and killed his three daughters, a chaperone who was supervising a visit with the girls and then himself last month was armed with a ghost gun, law enforcement officials revealed. David Mora Rojas was visiting his daughters Samarah Mora Gutierrez, nine, Samantha Mora Gutierrez, 10, and Samia Mora Gutierrez, 13, at a Sacramento church on 28 February when he opened fire.

Even better, here's a really interesting recent documentary on the topic of rising "ghost gun" popularity that's worth a peek for those who haven't seen it already . . .