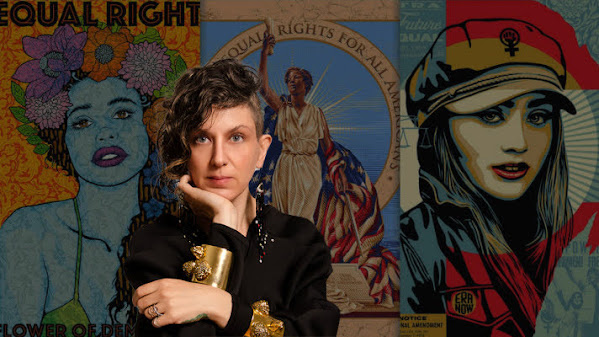 A leading and internationally recognized artist based in Kansas City now stands at the forefront of the fight to ratify the Equal Rights Amendment.

Peregrine Honig is part of the push from an elite group of creatives which hopes to achieve a historic impact on US policy by adding the ERA as the 28th Amendment to the Constitution.

Here's TKC art news that's more important than the blathering in so many self-indulgent local mags:

A bit more about this groundbreaking effort . . .

"On March 19, Artists 4 ERA is launching an exhibition to raise awareness and funds for Vote Equality, a grassroots nonprofit promoting equal rights for all Americans. The campaign brings together a who’s who of creatives, from street artist and activist Shepard Fairey, whose 2008 Hope poster became the iconic image for Barack Obama’s campaign, to Erin Yoshi and Peregrine Honig. The ultimate hope? To use the power of art to tell stories and rally people so that women can, at long last, get equal billing in the U.S. Constitution."

The artists, including Shepard Fairey, are bringing fresh urgency to the 99-year-old amendment that's still waiting to be ratified.