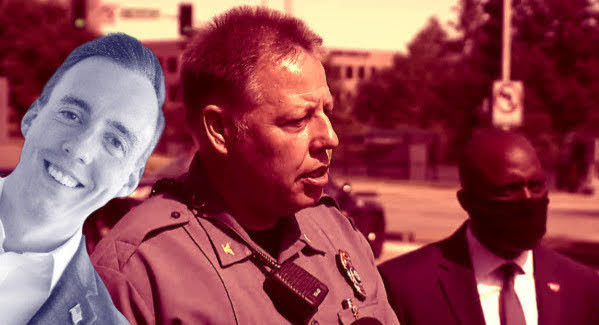 As we approach the zero hour of this year's Kansas City budget . . . We take notice of a strange screed that seems to demand silence from pro-police advocates.

The argument is peculiar given that Mayor Q also engages in conversation on Pete Mundo's talk show; which is under fire.

The KCPD Chief has spoken about the budget in a variety of forums, he has offered interviews with the Star and even appeared on national news networks pushing for more funding. The top cop doesn't take every interview request but the idea that he's not "accessible" if far fetched.

What we've seen during this budget debate is that Kansas City voters OVERWHELMINGLY support fully funding police and city council members have felt that pressure from the public.

In a last desperate attempt to remain relevant, Mayor Q and his cadre of supporters hope to turn their budget shenanigans into a partisan debate against conservatives. They'd like voters to overlook that even Prez Biden is working to oppose demands to "defund the police" from activists and professional protesters.

On the topic of "local control" Mayor Q and his acolytes are operating on the fringe given that the overwhelming majority of Kansas City voters have spoken against this idea. Remember that councilman Bunch was emboldened by the fantasy of council control of police after BLM protests but quietly backed off any real legislative action when it came time to call for a vote.

Accordingly and just for the cheap seats . . .

So many anti-police activists would like to imagine that they're arguing against conservatives or MAGA but the reality is that THE MAJORITY OF KANSAS CITY VOTERS SUPPORT POLICE. And what we've seen in this latest budget debate is that political operatives are willing to play games with law enforcement salaries and public safety funds in order to manufacture or even worsen local racial and ideological divisions.

Newsflash: EVERY neighborhood in KCMO wants safer streets and more support for cops willing to risk their lives to keep this cowtown safe . . . The slap fighting over money & control is only political theater amongst people who crave power.

In fairness, here's the best argument that defund/council control advocates can devise . . .

He (the KCPD Chief) often runs to the media, mainly just Pete Mundo’s talk radio show, to complain and inject political rhetoric into the debate. In conservative speak, Mundo’s show serves as a “safe space” for police chiefs who can’t handle tough questions from normal journalists and citizens.

It is not unusual for city departments and their leaders to argue for more money, support, or changes to help their staff and their operations. Most of that is done within the bounds of the city council meetings or staff meetings not drug out onto political talk shows. And the language in which those arguments are made by city staff are remarkably apolitical.

Smith and his antics are a dramatic departure from that tradition.

He is acting like the 13th city council member.

City Council in the latest round of redistricting included language that there should be consideration to expanding the number of council people that serve our city. Well...if you have been paying attention during this budget season it appears an additional council member has been added without getting elected: Police Chief Rick Smith of the newly created 1125 Locust District.


Learn about KCMO's proposed budget ahead of Thursday's vote

KANSAS CITY, Mo. - On Wednesday morning, a group of council members in Kansas City, Missouri, recommended slight changes to the $1.9 billion budget for fiscal year 2022-2023 first proposed in February. The full City Council will vote on whether to adopt the budget Thursday afternoon.