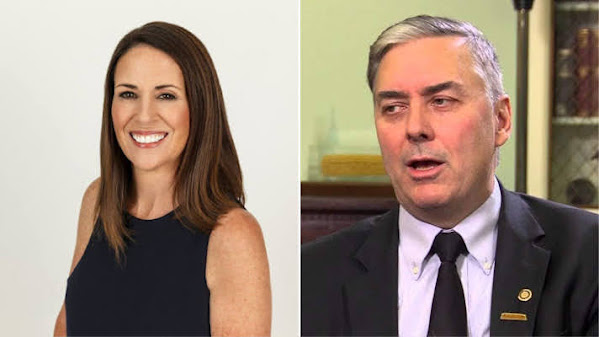 Some call her Mayor "Boom Boom" for reasons that aren't politically correct but still very complimentary.

However, recent investigations into Meth Town AND a police overtime crisis have turned her into pariah.

Most people assumed she dropped out of the election contest but now she corrects that misconception with a cagey comment that likely won't win her any new votes.

IN FACT, THE LATEST BIT OF POLITICAL TRICKERY FROM MAYOR WEIR LOOKS LIKE A CYNICAL STUNT TO AVOID ANY QUESTIONS FROM THE PUBLIC!!!

Insiders tell us that Rory Rowland is remarkable public speaker, has proven himself a competent elected official and makes the incumbent look uninspiring by comparison.

"There's no obligation for any candidate to campaign. My name will appear on the ballot on April the 5th," Weir said Monday.

Last month, the incumbent Independence mayor said, in part, "After much consideration, I have come to the difficult decision to concede the April general election."

But Monday she made it clear, she’s not out of the race just yet.

"I never said that I was withdrawing," she said. "I said I was ceasing my campaign."

Independence mayor suggests she's not out of April election just yet

INDEPENDENCE, Mo. - In or out? That's the question now for Independence Mayor Eileen Weir. Less than three weeks ago she abruptly conceded her race for a third term as mayor. But at Monday night's city council meeting, the mayor said she hasn't withdrawn - she's just not campaigning.