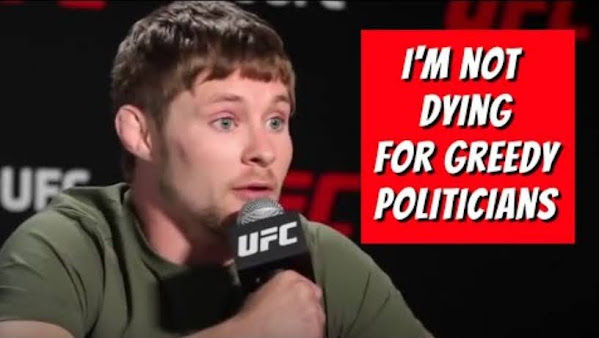 A homespun viewpoint on the crisis in the Ukraine has encountered ire from otherwise progressive pundits.

"UFC fighter Bryce Mitchell is being mocked by liberals.  Why?  Well, he speaks the truth and represents most Americans and you know how threatening that is to the Uniparty."

Wow, we didn't see this coming. Bruce Weber likely coached his last game at Kansas State Wednesday night and gave a tearful speech on camera on his faith, his love for KSU and his utter disdain for programs like KU that get caught cheating. I mean, wo...

UFC Fighter Unleashes on War Hawks in Washington, Tells Tucker a Lot of 'Elites Are Guilty of Treason'

Commentary Mixed martial arts star Bryce Mitchell has become a viral media sensation after voicing the sentiment of millions of Americans regarding the Russia-Ukraine war. On Tuesday, Fox News host Tucker Carlson interviewed the 27-year-old UFC featherweight fighter, who explained why he does not want American boots on the ground in Ukraine amid its deadly conflict with Russia.

UFC fighter Bryce Mitchell said he is "ready to fight" the "evil" that has taken over the United States Tuesday on "Tucker Carlson Tonight." "We're tired of this politics crap that's going on," he told host Tucker Carlson. "It's evil is what's going on. Evil has [taken] over this nation and we ain't afraid of it.


Bryce Mitchell Will Not Be Silenced

LAS VEGAS - As Bryce Mitchell nears the biggest fight of his career, facing a proven contender in a featured bout of a major UFC pay-per-view event, the spotlight focused on "Thug Nasty" continues to intensify.

Bryce Mitchell returns Saturday to the Octagon for the toughest test of his MMA career to date. He has in the past pushed wild conspiracy theories. This week, he said the US government controls him, and that the Federal Reserve is corrupt.