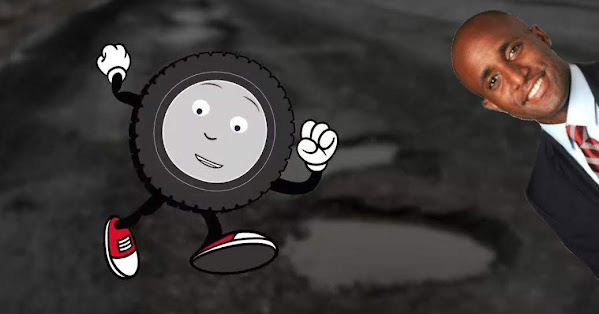 Here's a name check for the cowtown politicos that doesn't exactly match up with reality . . .

"Under dynamic Mayor Quinton Lucas, Kansas City uses gel-based bags to fill holes temporarily until the city is able to make the fix permanent. Imagine calling 311 and, ten minutes later, spying a city worker on your street, smoothing things over until a truck can make it to your block."

TKC FACT CHECK: MOST POTHOLES IN KANSAS CITY DON'T GET FILLED IN 10 MINUTES!!!

Local streets are garbage despite hype over a few tech tricks.

During Mayor Q's council tenure not so long ago . . . Waldo had a b-day party for a pothole and the streets really haven't improved much over the past couple of years.

A couple weeks ago, in the span of two days, I heard two different stories that illustrate just how bad Philly's pothole problem is: One: An infrequent city driver who comes to town once a week for meetings has twice-twice!-in the last two weeks driven into a pothole.