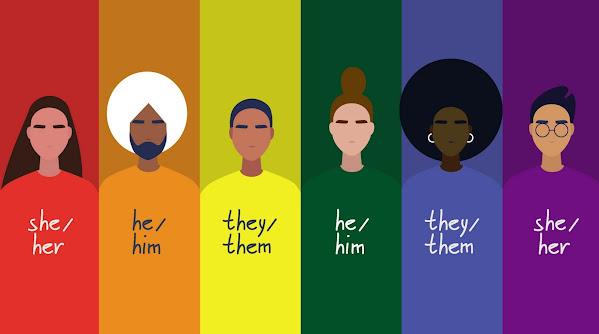 Because, in the real world, it's important to be courteous and respectful more than than anything else: Let's start out that MOST people don't mind calling a person by whatever name they choose . . .

TKC only has one pet peeve . . . Using THEY/THEM to describe a person is simply asking somebody to degrade their language.

THEY/THEM is plural and using those pronouns to describe a singular is, technically, incorrect.

Of course, if somebody is going to break down over it . . . I guess I'd do it. To be fair, given all the typos on this blog . . . It's not really like we're a stickler for grammar.

This important story offers a glimpse of the arduous requirements that now confront teachers AND offers a sign of push back . . .

This is in spite of the fact, the lawsuit contends, that the student in question never directly asked THE TEACHER to use a different name or pronoun — nor did the school have a formal written policy on pronouns or names at the time.

A long-time teacher in Fort Riley is suing her district after being reprimanded and suspended for refusing to use a student's "preferred pronouns." According to the filed by Pamela Ricard earlier this week, during the spring semester of 2021, USD 475 in Geary County middle school administrators issued "diversity and equity" training materials directing instructors to use "preferred names" instead of the student's legal name or name of record.