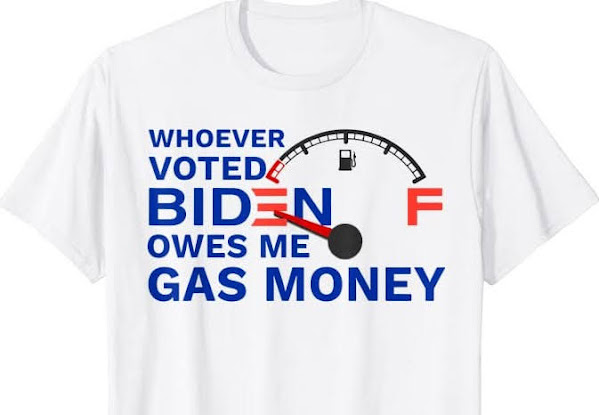 There are some truly amazing things on the Internets.

This morning we share a screed that's right up there with the flat earth theory . . .

This progressive pundit attempts to shift gas price blame away from the Commander-In-Chief:

Fact-checkers and political enthusiasts, like myself, have dealt with this faux issue for decades. Gas prices were debated back in 1996 when Kansas’s own (then) Sen. Bob Dole campaigned for president and urged a repeal of the 4.3 cent gasoline tax because the pumps were on track to reach $1.31 a gallon.

It was all over the papers again in the early 2000s, when gas prices appeared to have risen to the highest level ever. Journalists leaped on the subject in 2012, when partisan politicians complained that gasoline prices had doubled in President Obama’s term.

Even in 2022, the political theater hasn’t changed. It’s evolved into fallacious Twitter posts and “I did that!” Joe Biden gas pump stickers.

Gas prices rise after invasion of Ukraine, but Biden's not to blame - Kansas Reflector

The Kansas Reflector welcomes opinion pieces from writers who share our goal of widening the conversation about how public policies affect the day-to-day lives of people throughout our state. Allie Utley serves as the first vice president of the Kansas Young Democrats. This month, the United States beat a 2008 record for the average price [...]