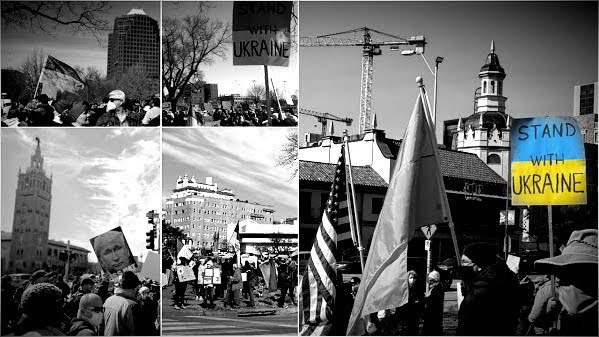 As an Eastern European conflict continues to escalate and pushes the world closer to nuclear annihilation, inevitable outcry over racism now arises and had been mostly ignored by Kansas City mainstream media.

Don't call this blog a pro-Putin given that we have ALWAYS documented that we think of so many white foreigners as Euro-trash . . . Except for the Irish (whom we love like our own and not just because of the San Patricios) and, also, a few kindly souls with decent cooking skillz.

The point here is that there's a racially charged angle of this story that shouldn't be overlooked because it's becoming increasingly problematic.

Here's the best summary we could find which synthesizes recent complaints . . .

"Even in times of crisis, sometimes the oppressed can also be the oppressor. In the immediate, chaotic aftermath of Russia's invasion, the United Nations admitted that non-Europeans living in Ukraine experienced "different treatment" by military officers, border guards, and groups of civilians while trying to flee the country, according to Filippo Grandi, the organization's High Commissioner for Refugees. While Ukraine was certainly not a racial utopia before Russia's invasion, it's disheartening to know that even in the midst of devastation, anti-Black racism can remain strong."

Read more of this excellent essay . . .

If you see Black people question their support for Ukraine, ask yourself what you'd feel in our place Like other devastating turning points in history, many of us likely remember how and where we heard last week's harrowing news: After weeks of rising tensions, Russia had invaded Ukraine.

Check even worse deets about the treatment Africans have endured in the war zone . . .

'Open the door or we die': Africans report racism and hostility trying to flee Ukraine

Alexander Somto Orah, 25, was among thousands of people crowding a Kyiv train station Friday, hoping to flee Ukraine amid the Russian invasion. He said he and his friends hoped to get to safety at the Polish border quickly but that officials wouldn't allow the group of Africans to board trains out of the region.

They are 'civilised', 'European' and 'look like us': the racist coverage of Ukraine | Moustafa Bayoumi

While on air, CBS News senior foreign correspondent Charlie D'Agata stated last week that Ukraine "isn't a place, with all due respect, like Iraq or Afghanistan, that has seen conflict raging for decades. This is a relatively civilized, relatively European - I have to choose those words carefully, too - city, one where you wouldn't expect that, or hope that it's going to happen".

To be fair, there is conservative push back against these sentiments which notes that the aggression of a nuclear power makes this war just a bit more important to the world than other conflicts  . . .

There are already a hell of a lot of foreign correspondents and human-rights workers at the Ukrainian-Polish border - an immigration problem all by themselves, perhaps. Quite a few of these reporters seem to be desperately seeking 'racism' stories, since that is increasingly the only news wh...

Still, the reality is that US news watchers have been bombarded with Ukraine coverage whilst suffering in other parts of the world has ALWAYS been habitually ignored . . .

Viewpoint on Ukraine: Why African wars get different treatment

In our series of letters from African writers, Algerian-Canadian journalist Maher Mezahi reflects on the different way that conflicts in Europe and Africa are viewed. We are all equal, but some are more equal than others. This play on George Orwell's adage has been brought to life as war broke out at the gates of the European Union.

Moreover . . . What really stands out is how Democratic Party pro-war cheerleaders have been allowed to ignore this issue rather than confront their hypocrisy. Again, we'd like to see our Republican friends engage in a bit of humanitarianism and win points in support of the rights of Africans, people-of-color and refugees . . . If they dare . . .

Opinion: We can't ignore the darker sides of global unity on war in Ukraine

Peniel E. Joseph examines racial bias in coverage of Russia's invasion on Ukraine in historical context and says it's erased the experience of Black and brown people attempting to flee Ukraine, while reinforcing toxic assumptions about who deserves empathy when facing the perils of war.

The racially charge politics which confronts the Democratic Party on the topic of Ukraine can't be ignored. The party of diversity, equity and inclusion can't afford to hide from this issue if they hope to win popular support ahead of midterm elections and as they push the world closer to a dangerous standoff betwixt nuclear powers.