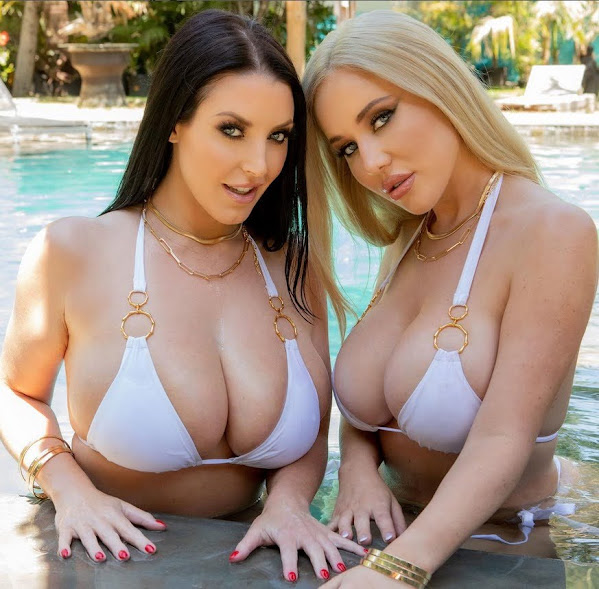 Right now pr0n hottie Angela and her friend Savannah inspire us to dive into this pool of relevant links and share this post featuring pop culture, community news and top headlines.

KANSAS CITY, Mo. - The ninth annual Feature Stages Festivities returns and will be presented Sunday, June 12th, from 11 a.m. to 4 p.m. Kauffman Center announced that the Festival is a free community event that showcases hundreds of young performers invites attendees to enjoy a wide range of diverse performance styles and engaging art activities.

The downtown Kansas City courthouse has been Jackson County government's headquarters since it was dedicated 1934. But it might not be home much longer. After 88 years, the departments that have operations in the art deco building that Harry Truman built when he ran county government could be moving into a new home elsewhere in downtown.


Where to find the lowest gas prices in KC

Former Kansas City Chiefs cornerback Charvarius Ward is set to take his talents to the Bay Area. According to Adam Schefter of ESPN, Ward has agreed to a three-year contract with the San Francisco 49ers. The deal is said to be worth up to $42 million and includes $26.7 million guaranteed.

In an expansive Crossroads gallery filling two rooms, deepest wishes of elders are rendered as works of art. For each of the roughly 50 works displayed in the Leedy-Voulkos Art Center, artists Andy Newcom and Marn Jensen sat with elders across the U.S. and had conversations that answered, "What would you wish for the world?"

Great interview with legendary Angela White! She talks about her come up, working hard to get to her goal, breaking all kinds of records, sexual education, a...

Biden executive order on cryptocurrency a disaster for US industry: Ex-Treasury official

Former Acting Assistant Treasury Secretary Gregory Zerzan explained on Tuesday the "unfortunate thing" about President Biden's executive order on government oversight of cryptocurrency, arguing that taking "a top-down governmentrun approach" is "not a pathway to innovation."

Germany has announced that it will buy 35 US-made F-35A fighter jets, the first major arms purchase to be publicly confirmed since Chancellor Olaf Scholz committed to ramping up his country's defense spending in the wake of the Russian invasion of Ukraine.

LVIV, Ukraine, March 15 (Reuters) - The United States warned China against providing military or financial help to Moscow after its invasion of Ukraine, as sanctions on Russian political and business leaders mounted and civilians sought to flee intense fighting on the ground.

Russia Is Spiraling Toward a $150 Billion Default Nightmare

(Bloomberg) -- Russia's economy is fraying, its currency has collapsed, and its debt is junk. Next up is a potential default that could cost investors billions and shut the country out of most funding markets.Most Read from BloombergUkraine Update: China Seeks to Avoid Russia Sanctions SideswipeElon Musk Challenges Vladimir Putin to 'Single Combat' for UkrainePutin's State Media News Is Interrupted: 'They're Lying to You'Panic Selling Grips Chinese Stocks in Biggest Plunge Since 2008U.S.

Jussie Smollett 's team is trying to spring the actor from jail while his appeal is heard. His attorneys have filed court paperwork alluding to the idea that he is in harm's way as long as he is behind bars.

The corpse of a Russian model who called Vladimir Putin a "psychopath" has been found stuffed in a suitcase one year after she went missing. Gretta Vedler, 23, was murdered following an anti-Putin social media rant where she questioned "can he really do anything?".

Flogging Molly with Russkaja and Vandoliers The Truman Friday, March 11 On Friday, Celtic rockers Flogging Molly brought St. Patrick's Day to the Truman a week early. The set dug deep into the band's first two albums, Swagger and Drunken Lullabies, along with new cuts like "A Song of Liberty."

The Kansas City Chiefs have seemingly moved on from S Tyrann Mathieu, but they also didn't put any effort into retaining him. The Chiefs are set to sign former Houston Texans S Justin Reid, but it's not because Mathieu declined an offer from a team.

A lot of thought also went into the kitchen-witch moniker. "We all love the aspect of cooking with intentionality," Metta says. "We love the magic of the kitchen and that the women who were historically called 'witches' were healers and brewers - in other words, some of the original self-sufficient women."

The Sporting Kansas City season has started, baseball is back, Patrick Mahomes got married and March Madness is about to tip off, but don't let all of those Kansas City sports stories let you miss another important one. The Kansas City Current kick off their season this week with their first match of the NWSL Challenge Cup on Friday in Louisville.

King Von - Too Real is the song of the day and this is the OPEN THREAD for right now.