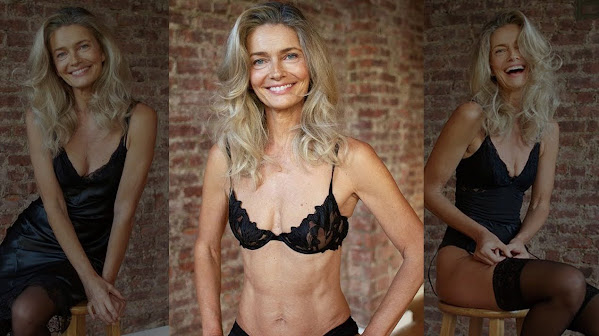 Apropos for #TBT, a legendary hottie offers an important perspective . . .

And THAT inspires this gathering of pop culture, community news and top headlines . . .

KANSAS CITY, Mo. - Six weeks ago, the KSHB 41 I-Team started monitoring the prices of milk, bread, cereal, eggs and ground beef at five metro grocery stores to better understand how inflation is affecting Kansas City. It wasn't meant to be an apples-to-apples price comparison, since the brands and sizes can vary from store to store.

CLAYCOMO, Mo. - Ford Motor Company is dividing into two separate divisions: one for electric vehicles and the other for gas engines. The changes will impact more than 7,000 Ford workers in the Kansas City area. Ford Model E will focus on electric vehicles, Ford Blue will continue improving internal combustion engines.

KANSAS CITY, Kan. - Economic challenges keep piling on up for several Kansas City businesses, including landscaping companies getting ready for the warmer seasons. Mears Lawn and Landscape explained that costs for materials, gas, fertilizer and tools are all increasing, causing the company to have to raise prices anywhere from 10% to 25% depending on the service.

The number of people in the United States who identify as LGBTQ is rising, and according to a Gallup survey "one in five Gen Z members" identifies as other than heterosexual. The decision to come out as LGBTQ can depend on the support and reaction a person anticipates receiving from family, friends, community members and employers.

KANSAS CITY, Mo. - An early morning police pursuit ended in a crash in Platte County Thursday. It started just after 3:30 a.m. when the Platte County Sheriff's Office said a member of its department saw a vehicle that fit the description of one involved in an auto theft from earlier.

Paulina Porizkova is sending a thinly-veiled critique at Instagram after she says the social media app allegedly "censored" her by removing a photo post she shared on Tuesday comparing the spread of misinformation regarding the Russian invasion of Ukraine.

The congressional committee investigating the Jan. 6, 2021, attack on the U.S. Capitol on Wednesday said former President Donald Trump may have engaged in criminal conduct in his bid to overturn his election defeat. "Evidence and information available to the Committee establishes a good-faith belief that Mr. Trump and others may have engaged in criminal and/or fraudulent acts," the committee said in a court filing.

U.S. Rep. Lauren Boebert, R-Colo., on Wednesday defended her outburst during President Biden's State of the Union address after taking heavy criticism from Democrats. "The left is p---ed because I called out Biden's botched withdrawal from Afghanistan that left 13 of America's finest in a flag-draped coffin," Boebert tweeted Wednesday morning.

Democrats look for offramp from masking in public

Democratic lawmakers are distancing themselves from the strong pro-mask stance they took for most of the pandemic, which is becoming more and more of a political liability at a time when many Americans are reaching their limits of COVID-19 fatigue

KYIV/KHARKIV, Ukraine, March 3 (Reuters) - Russian troops were in the centre of the Ukrainian port of Kherson on Thursday after a day of conflicting claims over whether Moscow had captured a major urban centre for the first time in its eight-day invasion.

All People Vote With Their Feet


A million refugees have now fled Ukraine since the start of the war, U.N. says

The United Nations says 1 million refugees have fled across the borders of Ukraine since Russian forces invaded a week ago. "In just seven days we have witnessed the exodus of one million refugees from Ukraine to neighbouring countries," U.N. High Commissioner for Refugees Filippo Grandi wrote in a tweet on Wednesday.

France's finance minister said Tuesday that Western sanctions would cause the Russian economy's collapse. A top Russian official responded immediately, saying that economic wars often turn into "real wars." The West has leveled sweeping sanctions against Russia that appear to be disrupting its economy.


It's A Round World After All

The business fallout from the war in Ukraine is about to extend to outer space.

Marilyn Manson has sued Evan Rachel Wood for defamation over her sexual abuse allegations against him, which Manson claims are a "malicious falsehood."

ADCO: Printing for Northeast since 1967

By Abby Hoover For 55 years, ADCO Litho Plate has fulfilled Kansas City's printing needs, operating out of its shop at 6043 E Truman Rd. Owner Theresa "Terry" Cunningham is proud to continue her family legacy. In 1971, Terry was handed her father's business, ADCO Litho Plate, at the age of 18.

SHAWNEE, Mo. - A former school in Shawnee is now a sanctuary for both dogs and people. Imagine Furever Ranch opened as a senior dog rescue about six months ago, but the humans who give their time and love said it's rescued them, too.

KC Can Compost grows green infrastructure while expanding its own footprint

The market for commercial composting services goes well beyond restaurants hoping to dispose of food scraps - a welcome discovery for Kristan Chamberlain, who saw such specialized demand disintegrate in 2020 amid a pile of bad news for struggling eateries.

LEE'S SUMMIT, Mo. - You can feel the luck of the Irish at a new pop-up bar coming to downtown Lee's Summit. Shenanigans is a St. Patrick's Day-themed pop-up bar that will open Friday, March 4 at the event space next to Smoke Brewing Company.

Much cooler today with sunshine and a strong east wind of 15 mph gusting to 20 mph. High 58. Increasing clouds, south wind and warmer air Friday. High 72. Cloudy, warm, humid-feeling and windy Saturday. Scattered showers and thunderstorms are likely between 3 and 9 pm.