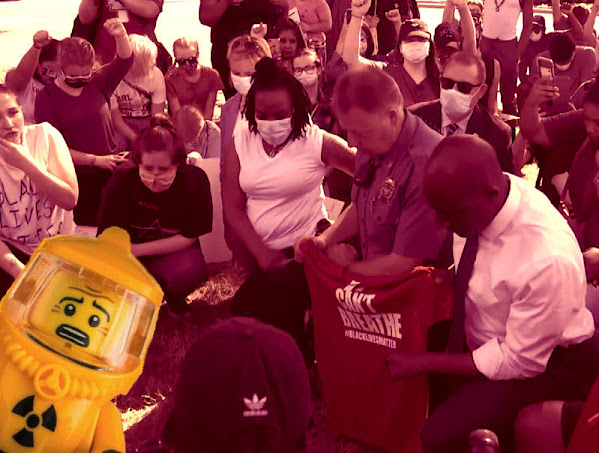 This Sunday the Kansas City Star targets KCPD with a series of articles alleging discrimination using unnamed and off-the-record sources along with activist rhetoric, lawsuit dox and a healthy dose of community complaints . . . Kinda like a blog but without any jokes or photos of cleavage and smiling ladies with big butts.

Of all the garbage they're sharing today, this passage stands out to us . . .


In a closed-door meeting with Kansas City police commanders last year, Police Chief Rick Smith said he had taken a knee in solidarity with Black Lives Matter protesters in 2020.

But, Smith said, he didn’t mean it.

“I may be doing things or saying things and that may not be my personal beliefs, but I’m gonna do what I need to do that’s best for the department,” Smith said, according to one commander who attended the meeting and requested anonymity for fear of retaliation.

Smith told the commanders he took a knee that day to silence his critics and to protect his officers — not because he believed in the message of the protests unfolding on the Country Club Plaza after the murder of George Floyd in Minnesota.

At face value that note isn't going to make anybody happy. The story threatens to enrage social justice advocates because it alleges deception and conservatives might believe that it makes the retiring Chief seem like a man without conviction.

Heck, even TKC was a bit peeved at first reading . . . As far as politics goes, I've only been on my knees at church or in front of a woman and I hope to God that I've always been honest about my intentions in those desperate circumstances.

THIS POORLY SOURCED STORY IS JOURNALISTIC GARBAGE AND ONLY SILLY PEOPLE WOULD EVER BELIEVE IT!!!

Allow TKC a personal aside since, after all, this is a blog . . .

When we first started publishing online . . . Journalism purists decried our efforts and denounced citizen media and neighborhood reporting. What this blog has always been about is taking what we know and sharing it without all the formalism and pretense of so many other news sources. There's a lot of moving parts for our special bloggy sauce but to get to a place where we're getting hundred of thousands of readers every month and don't even have to bother with an early update every day . . . We had to ignore a great deal of criticism from print media purists.

The Kansas City Star has seemingly rejected their own journalistic principles, ethics and standards.

We can't forget that their coverage of outgoing KCPD Chief Smith has been mostly based on lies and political spin. 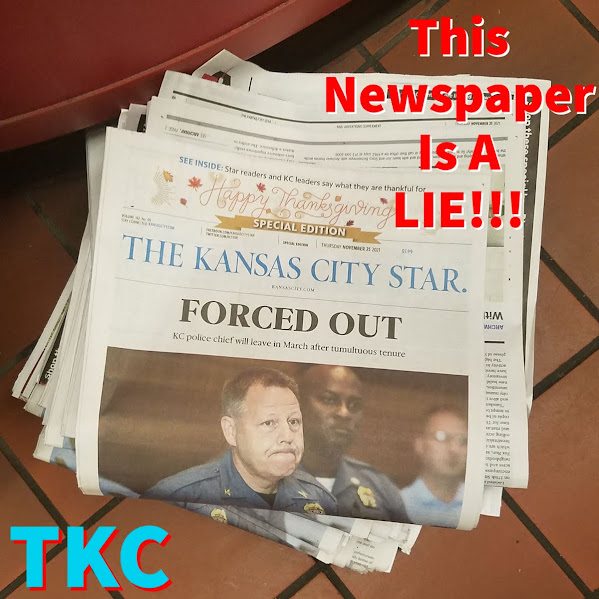 Months ago they claimed the Chief was "forced out" only to have the police leader cite his plans for retirement years ago and fulfill his commitment to stay on until after the 2022 budget process -- A battle which he won for his department.

This Sunday edition from a former cowtown institution seems very much like a pity party and yet another low point for Kansas City print journalism.

As always we encourage our readers to "follow the money" and realize  . . .

All of this is merely political backlash over a budget battle and a ploy to pick the next chief whilst political maneuvering against the police board and Missouri Republicans.

Again, what surprises us is that it's so feeble, pathetic, obvious and unconvincing.

In fairness, we dare our blog community to more via www.TonysKansasCity.com links . . .

KCPD Chief Rick Smith knelt in honor of George Floyd. Then he said he didn't mean it

In a closed-door meeting with Kansas City police commanders last year, Police Chief Rick Smith said he had taken a knee in solidarity with Black Lives Matter protesters in 2020. But, Smith said, he didn't mean it.


Black KCPD officers saw discrimination in beard policy. They fought back - and won

Titus Golden watched with frustration in early 2020 as two white officers, each sporting full beards, went about their business as if nothing was wrong. To Golden the sight of the facial hair showed a clear discrepancy in how Black and white officers are treated in the Kansas City Police Department.

Former Kansas City police officer Scott Wells said being Black in the department was like " being a mouse in a snake cage." "You're constantly watching your back 24/7," he told The Star. In Wells' nearly two decades at KCPD, sergeants nitpicked his every move, he said.


He was a detective with the KCPD. And he still got pulled over for driving while Black

Herb Robinson has feared for his life twice in his 30-year police career. One was when he was shot in the line of duty. The other came when he was pulled over last year by two fellow Kansas City police officers. It was plainly racial profiling, Robinson says.


While KCPD struggles, this city made its police force more diverse than its residents

When Kansas City police leaders talk about the department's diversity problem, they sometimes speak as if it is an unsolvable mystery. But there is one city that has figured it out. Across the country in Atlanta, city leaders have created a police department that is even more diverse than the population it serves.

Scott Wells, who worked as an officer for the Kansas City Police Department from 1998 to 2017, said he experienced racist harassment on the job.

Herb Robinson, a Black Kansas City detective, was in uniform and driving an unmarked police car when two officers pulled him over. Robinson wasn't speeding. He had not violated any traffic laws. The registration was up to date. He knew as soon as the lights flashed behind him that it was racial profiling.