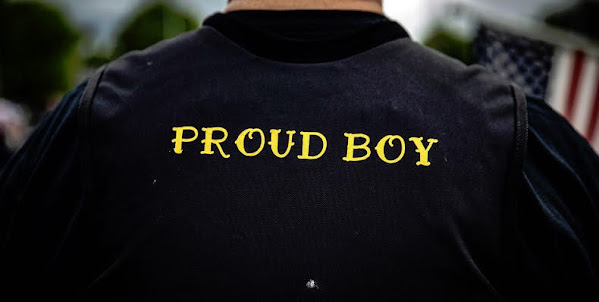 A local dude who participated in the worst panty raid of all time insurrection remains in a federal dungeon.

He's probably lucky they didn't sent him to Guantanamo Bay.

Meanwhile, most denizens of the urban core know murder suspects and so many other habitual crooks who never see this kind of time.

Make no mistake . . . We don't feel sorry for the "Proud Boy" who is responsible for his own hot mess.

All of this is merely a reminder that good old-fashioned crime seems a bit safer and more financially rewarding than uninitiated plebs participating in politics.

Here at TKC we are initiated and sadly realize that we're too cynical to be manipulated with empty promises of "liberty" and we'll probably be lured into the fed dungeon by way of chubby recently divorced 30-something white women and Chinese food . . .

Meanwhile, here's the sob story of an insurrectionist with local connections . . .

The suspect is the only one of the six who remains in custody. The rest remain out on bond on personal recognizance.

According to the court record, the judge denied his request to be released from custody. It upheld a ruling from a previous judge that said he was a danger to the community. His attorney disagrees.

KANSAS CITY, Mo. - Six people linked to the Kansas City metro chapter of the Proud Boys, and charged in connection with the insurrection on the U.S. Capitol, pleaded not guilty to the crimes. William Norman Chrestman, of Olathe, Kansas; Christopher Charles Kuehne, of Olathe, Kansas; Louis Enrique Colon, of Blue Springs, Missouri; and Ryan Ashlock, of Gardner, Kansas, each appeared in federal court Wednesday.