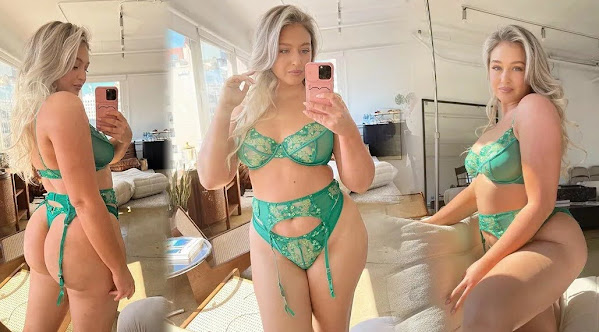 Right now hottie Iskra and her body of work inspires this peek at pop culture, community news and top headlines.

Persons wanting more information about KCMO's plans to repair and replace sidewalks and install curb ramps at intersections to serve persons with disabilities in south Kansas City may join an online meeting from 6 to 7 p.m. Tuesday, March 15, at www.tinyurl.com/SouthSidewalks or join by phone at 1-872-212-5076, conference ID 321 591 525#.

KANSAS CITY, Mo. - The Kansas City Police Department said that compared to this time last year, the city has seen more than twice the amount of fatal car crashes. At this point in 2021, Kansas City saw 10 fatalities from traffic crashes. In 2022, the number so far is 21.

Olathe superintendent on Olathe East shooting: 'There are so many heroes in this situation'

KANSAS CITY, Mo. - Olathe School District superintendent Dr. Brent Yeager said Wednesday that he is grateful for the support of the community, both in Olathe and beyond in the wake of Friday's shooting at Olathe East High School. "It was an onslaught of people who call, text, email to ask, 'What do you need?'" he recalled.

KANSAS CITY, Mo. - The city of Kansas City has identified a contract worker killed last week in a trash truck crash. Huan Doan, 47, died March 1 after the KC Public Works truck he was in crashed and caught on fire.

KANSAS CITY, Mo. - Long-term road closures associated with the Buck O'Neil Bridge project will begin next week. The Missouri Department of Transportation said crews will close areas beginning Sunday, March 13. The work was originally scheduled to happen this week, but MoDOT delayed the project because of the Men's and Women's Big 12 Championship Tournaments at T-Mobile Center.

Iskra Lawrence pens powerful open letter to her younger self on body positivity: 'I know right now you think you aren't thin enough'

She's shared a heartfelt message of self-love and self-acceptanceIn celebration of our International Women's Day digital issue , British model, mother and influencer Iskra Lawrence has written a heartfelt open letter to her younger self.

Americans' approval of President Joe Biden appears to be on the rise amid his handling of the Russian invasion of Ukraine and shortly following his State of the Union address last week. Biden's favorability among registered voters has risen slightly to 45%, according to a new Politico/Morning Consult poll conducted March 4-7.

Trump's Truth Social gets off to a rocky start

'Putin is angry': U.S. intel heads warn Russia could 'double down' in Ukraine

Ukrainian authorities warned, meanwhile, that power had been cut to the Russian-held Chernobyl nuclear power plant, risking the possible release of a "radioactive cloud" if cooling systems can't be kept on line. Fears, however, were played down by the global nuclear agency..

The United States is sending two Patriot missile batteries to Poland as a 'defensive deployment' The missiles are designed to counter and destroy incoming short-range ballistic missiles, advanced aircraft and cruise missiles Kamala Harris will arrive in Poland on Wednesday for a three-day visit to Warsaw and the Romanian capital,

The first person to receive a heart transplant from a pig has died, two months after the groundbreaking experiment, the Maryland hospital that performed the surgery announced Wednesday. David Bennett, 57, died Tuesday at the University of Maryland Medical Center. Doctors didn't give an exact cause of death, saying only that his condition had begun deteriorating several days earlier.

Courteney Cox admits she doesn't remember being on 'Friends'

Courteney Cox made a shocking revelation when she admitted that she doesn't remember much of her time filming "Friends." Cox, 57, recently sat down with "Today's" Willie Geist for an extended "Sunday Sitdown" interview when the actress shared that she realized there were a lot of gaps in her memory when she appeared on "Friends: The Reunion" in May 2021.

Camila Cabello Brushes Off Wardrobe Malfunction, But Reveals She 'Said No' to Wearing 'Nip Covers'

On Monday, the "Havana" singer, 25, accidentally flashed the hosts of BBC's The One Show while executing her favorite dance move featured in the video for her song "Bam Bam." In the now-viral moment, Cabello stood up and adjusted her oversized, patterned, button-up blouse. Seconds later, her shirt accidentally opened, resulting in a brief reveal.

KANSAS CITY, Mo. - As the record-breaking Auschwitz exhibit enters its final weeks, Union Station is announcing what's up next. "MAYA: The Great Jaguar Rises" will open on May 13, and tickets are already on sale.

When Cynthia Levin, the producing artistic director at Unicorn Theatre, read the script to Tiny Beautiful Things when the play was released five years ago, it wasn't one she would have chosen for Unicorn Theatre-but the play couldn't be more perfect for the 2021-22 season. "I'm always looking for political ramifications-racial, gender, cultural identity- and...

The bar at Thou mayest River Quay featuring Mean Mule spirits. // Photo by Liz Goodwin Mean Mule continues its quest for spirit innovation with new blue agave gin If you call yourself a cocktail enthusiast, then odds are you've been to Mean Mule.

Hide Transcript Show Transcript IT IS 6:18 AND A LOT KNONGWI ON BETWEEN WNO AND FRIDAY. NICK: TWO STORMS AND SNOW ACCUMULATION. THAT IS WHY IS A WEATHER ALERT DAY. THURSDAY NIGHT INTO FRIDAY MORNIN G.UP ALONG 36 HIGHWAY TO SAINT JOSEPH AND THAIST WHERE YOU MIGHT SEE SOME HEAVY SNOW.

Camila Cabello - Bam Bam is the song of the day and this is the OPEN THREAD for right now.