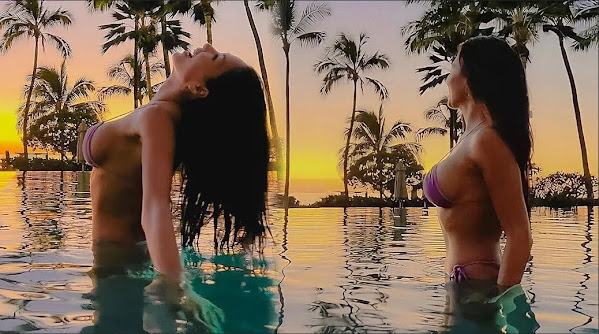 On this grey evening we're inspired by hottie Nichole as we check pop culture, community news and top headlines.

Are you looking for a job? The Internal Revenue Service in Kansas City is holding a job fair to hire 1,000 new employees in Kansas City.The IRS said it needs 5,000 employees at three of its major locations, including Kansas City."We're very excited.

WASHINGTON, D.C. - Two people injured in the shooting at Olathe East High School are recognized by Congress a second time. Sen. Roger Marshall made a tribute to school resource officer Erik Clark and assistant principal Dr. Kaleb Stoppel on the Senate floor. His remarks have now been officially added to the Congressional Record.

Josh Henges remembers the first time he saw an unhoused person - near where the Kauffman Center for the Performing Arts is today. He was 5 years old. He recalls his mother answering his questions about what he saw and "from that moment that spark has lit a fuse that has not come out."


Get The Lead Out

New study to look at lead exposure in Kansas City

KANSAS CITY, Mo. - A new study through K-State and a researcher at the university could help reduce the possibility of lead ending up in the soil around homes and vacant lots. That means it could also lower the risk of lead exposure to people living near those locations.

Harry Truman Helped Make Our World Order, for Better and for Worse

Americans today seem to believe that we live in especially exhausting political times. But the rhythms of our moment-pandemic, protest, pandemic, election, insurrection, pandemic, invasion of Ukraine-have nothing on the Truman era. Between April, 1945, when Franklin D. Roosevelt's death thrust Harry S. Truman into office, and January, 1953, when Truman handed the Presidency to Dwight D.

The Masked Singer US star Nicole Scherzinger looked like a total goddess in a Hawaiian sundress in her latest vacation snaps.

President Joe Biden sought to use a 110-minute video call on Friday to dissuade his Chinese counterpart from assisting Russia in its grinding war with Ukraine, a pivotal moment that could determine the trajectory of the bloody conflict.

Biden has labelled Putin a "war criminal" and a "murderous dictator" in recent days after the Russian leader last month sent tens of thousands of troops into Ukraine in what he called a special operation to degrade its military capabilities and root out people he called dangerous nationalists.

The World Food Programme says warehouses are empty and infrastructure has been destroyed; rescue work continuing at theatre hit by Russian airstrike

Putin appears at huge pro-war rally; some of 200,000 crowd said ordered to attend

Russian President Vladimir Putin appeared at a huge flag-waving rally at a Moscow stadium Friday and praised his country's troops in biblical terms as they rained lethal fire on Ukraine's cities.

The US House of Representatives on Friday passed a bill banning race-based discrimination on hair, specifically textures or styles associated with a particular race or national origin such as dreadlocks, afros and braids. The bill is known as the Crown Act, standing for Creating a Respectful and Open World for Natural Hair.

Caitlyn Jenner dismisses criticism of trans athlete stance: I 'had the balls to stand up for' women in sports

Caitlyn Jenner clapped back at accusations on Thursday that the former Olympic gold medalist had launched "yet another disgraceful attack on trans athletes." "No, I just had the balls to stand up for women and girls in sports," Jenner tweeted in response to an article from the UK-based LGBTQ site Pink News.

Leah Remini may have unconditional love for bestie Jennifer Lopez, but that's not to say she doesn't have a few gripes with the iconic performer! In a hilarious video posted to Remini's TikTok on Wednesday, the Leah Remini: Scientology and the Aftermath host, 51, jokingly shared why she thinks Lopez, 52, is "so annoying."

KANSAS CITY, Mo. - Kansas City welcomed the newest professional team Friday with the arrival of The Kansas City Outlaws. The KC Outlaws is one of eight bull riding teams across the United States playing in PBR's new Team Series league. The KC Outlaws will host competitions at the T-Mobile Center in downtown Kansas City, Missouri.

Keep Them Coming: The Strand Theater on Troost


Ladies Handle Boxes By Themselves

Amazon's opening of a new delivery facility in Lenexa, Kansas, in June 2021 came just months after the company pledged to increase the number of women in senior technical jobs by 30%. An early hire to help reach that goal was bringing in Mandy Turner to open the facility and serve as its site lead.

"Reupholstery is an art form that needs to come back - both for sustainability reasons and sentimental value," Alex Matlack shared. "To have a custom piece that is a sentimental, beautiful heirloom is really special. I think it is important for our surroundings to really reflect our souls so we can feel connected to the places that we're in."

Hide Transcript Show Transcript MAKE SURE YOU HAVE A WARM COAT FOR EVENING PLANS. WHETHER IMPACT THROUGH 10:00 P.M. BECAUSE IT WILL BE WINDY. EXPECT WIND CHILLS IN THE LOW-TO-MID 30'S AND ACTUAL TEMPERATURE IS RELATIVELY SADTEY INHE T UPPER 30'S AND LOWER 40'S. TOMORROW MORNING, LOTS OF SUNSHINE AND TEMPERATURES NEAR THE FREEZING MARK.