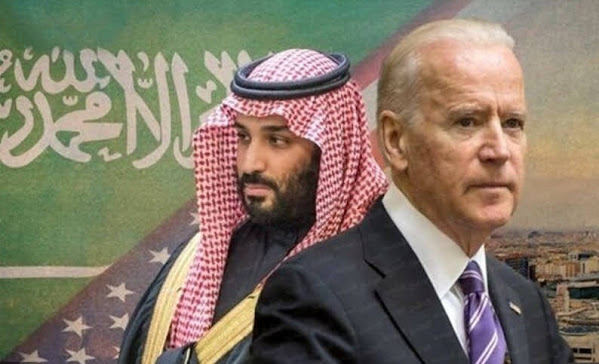 A former local newsman offers his perspective and more resources on US partnership with a brutal, totalitarian Islamic regime.

Here's the crux of his ethical quandary . . .

One reason I link you to the Atlantic story today is that Saudi Arabia continues to challenge the moral center of the U.S. and our leaders. Our government has tolerated a wide range of human rights restrictions and abuses by the House of Saud in part because our country has depended on Saudi's oil to power our vehicles.

For quite different reasons, Russia has challenged our moral center, too, especially in its invasion of Ukraine. And in turn our political leaders have been much more willing to do what they can to punish Russia's dictator than, historically, they've been willing to criticize or work against whoever holds the title of king in Saudi Arabia.

Is Saudi Arabia's leader really an ally of the U.S.?

In 2002, some months after the 9/11 terrorist attacks -- perpetrated mostly by men from Saudi Arabia -- I visited that kingdom with other opinion journalists from the U.S. and Canada. We spent time talking with private citizens, government officials,...

Should Biden Really Be Begging Saudi Arabia and Venezuela for Oil?

The drop-off in Russian oil supplies offers the Biden administration an opportunity to reverse a failed policy and engage with Maduro's regime in a new, more realistic way. Biden has had more success in his outreach in South America. On March 5, high-level U.S.


As Ukraine burns, Saudi Arabia and UAE try to get Biden to do their bidding

On Wednesday, Joe Biden seemed to have found a path to the Gulf states' hearts. He got the United Arab Emirates to agree to urge members of OPEC+ (which includes Russia) to increase oil production. For a moment, the announcement by the UAE reduced oil prices. But on Thursday, they resumed their surge.


Could Middle East nations come to the rescue as the Ukraine war drives up oil prices?

The UAE suggested that it may support an increase in oil output within the framework of OPEC+. We ask energy expert Amena Bakr how likely that is to happen.

The de-facto leaders of Saudi Arabia and the United Arab Emirates have declined to arrange calls with US president Joe Biden in recent weeks as the US and its allies have sought to contain a surge in energy prices caused by Russia's invasion of Ukraine.