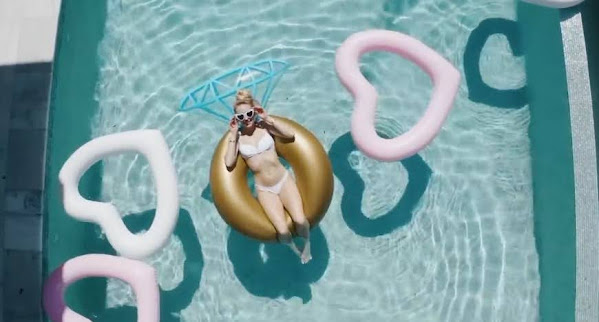 Still . . . It's fair to criticize social media celebs and share a moment of doubt which realizes that money is just an idea that humans invented.

Let's not forget that every state sanctioned currency throughout the history of the world has eventually collapsed.

But let's not get bogged down with boring stats.

It's better to note some of the highlights from Brit's EPIC clip that are more insightful than the baller baby momma simply noting "It was a good time."

Check the private plane that kicks off the video.

A photo shoot features a bevy of luxury cars that cost TWICE what the average Chiefs fan makes in a year.

Another photo shoot features an EPIC YACHT valued at a few MILLION bucks.

To humanize the hotties . . . There's goat yoga which is apropos since the recent playoff FAIL of hubby-to-be Patrick Mahomes reveals that he's likely NOT THE G.O.A.T. and might be a Super Bowl one hit wonder as far as the Kansas City Chiefs are concerned.

There are million dollar homes, gourmet food, expensive liquor and a fading glimpse at the good life which most Kansas City Chiefs fans will never afford.

Make no mistake, this is A POWERFUL FLEX which provides a glimpse at an American consumer ideal that seems devoid of any virtue beyond gleefully embracing luxury goods & services.

Instead, the clip serves as a valuable bit of American ethnography at the outset of another cold war that is being waged by way of technology and international monetary policy.

Because so many pundits are denying it, right now it's clear there's a very real danger the US won't stand as the world's reserve currency forever. The end of that reign will conclude the United States serving as the world's leading super power and so many benefits and privileges that come with the job.

Slap fighting with Vlad and the Russkies might not change the status quo but there's simply no denying that the world's economic engines are moving toward the far east.

Americans continue handing over every last dime of "disposable" income to watch ballers play games that might be rigged so that their sweethearts can enjoy a lavish lifestyle that will, eventually, be nothing more than a memory.

And so, actually, we enjoyed the clip as yet another testament to a time that is inevitably coming to an end.