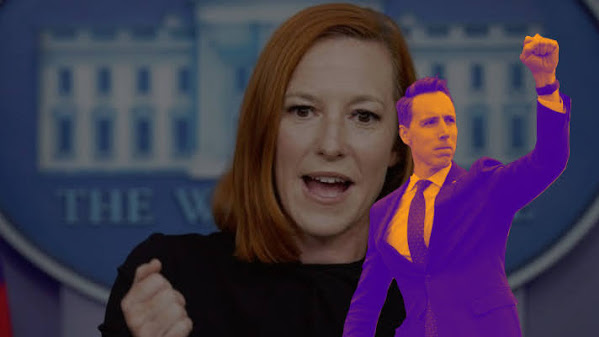 Intensifying debate over rumors of war involves one of Missouri's most outspoken politicos.

Let's take moment and consider that tough talk pushing the US closer to a war with Russia comes from an otherwise "progressive" Prez Biden Administration.

Meanwhile, the GOP taking a "dovish" stance might seem out of character as Americans are split on this issue but not along partisan lines.

Meanwhile, here's a peek at political slap fighting that should keep us entertained given that Russia might invade before a political stance is finalized . . .

White House press secretary Psaki was asked to respond to Hawley's call for the Biden administration to abandon support for Ukraine's eventual admission to the North Atlantic Treaty Organization (NATO), arguing it would not be in U.S. interests to be bound to defend Ukraine militarily.

"If you are digesting Russian misinformation and parroting Russian talking points, you are not aligned with longstanding bipartisan American values, which is to stand up for the sovereignty of countries like Ukraine, but others," Psaki said at a press briefing.

Related reading from a Republican collegue . . .

Surprising support from a progressive paper . . .

Sen. Josh Hawley (R-Mo.), in a letter to the Biden administration this week, made the case that the United States should renounce the possibility of Ukraine eventually joining NATO to avoid a confrontation with Russia.