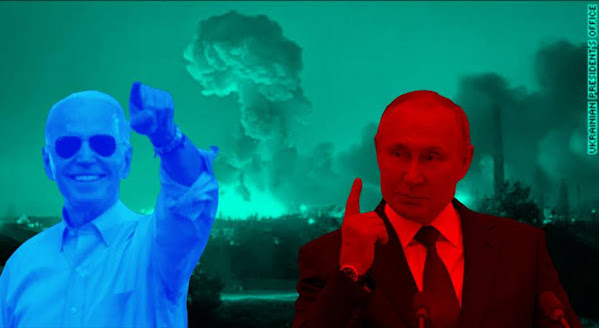 One year into the administration of Prez Biden and the world is a remarkably worse place.

We didn't want to wait until noon morning to update and had a few seconds to consider the fate of humanity.

And so tonight we share more than a few links on our mind that should be good enough to inspire a few thoughts from night owls along with the question . . .

Is there anybody who Kansas City who thinks Prez Biden did a good job handling Vlad & this hot mess???

I'm honestly curious to see any semblance of an argument supporting the White House and their strategy or lack thereof . . .

Ukraine was poised to implement a 30-day state of emergency on Wednesday, and President Volodymyr Zelenskyy called up military reservists, as Russia recognized two separatist regions as independent and appeared mobilized for major military action. Zelenskyy said that Ukraine wants "silence" but noted it must act.

The attack began moments after Russian President Vladimir Putin announced he had "decided to conduct a special military operation."

Russian forces have unleashed an attack of Ukraine on the orders of Vladimir Putin, who announced a "special military operation" at dawn, amid warnings from world leaders that it could spark the biggest war in Europe since 1945. Within minutes of Putin's short televised address, at about 5am Ukrainian time, explosions were heard near major Ukrainian cities, including the capital Kyiv.


Russia has launched its war in Ukraine

Russia's long-looming invasion of Ukraine has officially begun. Russian President Vladimir Putin announced Thursday morning local time that he is launching a "special military operation" in Ukraine, a move that was followed up byreports of explosions around cities, including Kharkiv in eastern Ukraine, and the capital, Kyiv .

Ukraine warned its citizens on Wednesday to avoid traveling to Russia and to leave the country immediately if they are already there. The Ukrainian government later voted to impose sanctions on 351 Russian lawmakers.

The latest on the Russia-Ukraine crisis: ___ KYIV, Ukraine - Ukraine's border guard agency says that the Russian military has attacked the country from neighboring Belarus. The agency said that the Russian troops unleashed artillery barrage as part of an attack backed by Belarus.

Russian president Vladimir Putin's escalating threats to invade and annex Ukraine have drawn global condemnation. Former president Donald Trump, though, had a different take. Asked to comment on the crisis by conservative talk radio host Buck Sexton, Trump responded with enthusiastic praise for everything Putin. The Russian leader, Trump said, was a "genius."

US President Joe Biden condemned an "unprovoked and unjustified attack by Russian military forces" in a statement Wednesday evening following explosions in Ukraine. "President Putin has chosen a premeditated war that will bring a catastrophic loss of life and human suffering," Biden said.

Asian markets and US stock futures plunged on Thursday as Russian President Vladimir Putin announced a military operation in the Donbas region of Ukraine.

Feb 23 (Reuters) - Gold prices on Thursday jumped over 2% to their highest in more than a year, with investors flocking to safe havens as Russian forces invaded Ukraine after President Vladimir Putin authorised what he called a special military operation.