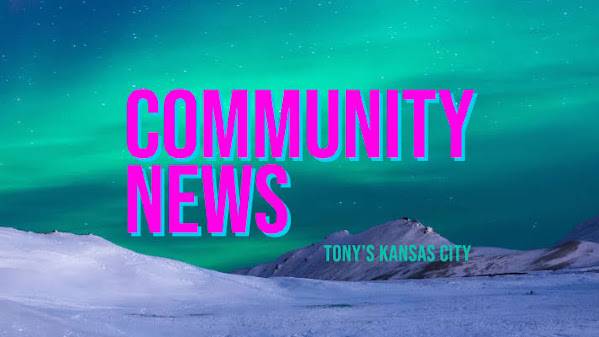 Even when our schedule gets a bit mixed up, we find that these posts provide some worthwhile reading material for locals who have stumbled upon our humble corner of the Internets.

Accordingly, here are some local news links & TKC snark worth checking for locals who, like us, love all things Kansas City . . .

Demolition within the building - which also houses Thelma's Kitchen - is expected to begin in the spring, Father Justin Mathews told Startland News, detailing the significance of the project and what it means for the residents who rely on the work of Reconciliation Services.

KANSAS CITY, Mo. - Kansas City wouldn't be what it is without the dedication of Clyde McQueen over the last three decades. McQueen is celebrating 35 years with the Full Employment Council. During his career, he has redefined workforce development in the KC area and helped thousands of people with employment.

Kansas colleges work to prepare next generation of teachers

Schools are at a crossroads right now and teachers are caught in the center of it. In the Kansas Legislature, several education bills will be coming out of committee this week, including a school voucher bill and a "parents bill of rights."

The banks of the Missouri River have changed since the 1850s and '60s, when slavery in the U.S. was in its final throes - especially in St. Joseph, where a double-decker highway now separates most of the city from the river. Back then, before the U.S.

JEFFERSON CITY, Mo. - The Missouri Supreme Court on Tuesday ruled in favor of a law banning the use of public funds for campaigning. Several cities in 2019 sued to overturn the law against using public resources to support candidates or ballot measures. The cities argued the law unconstitutionally limited public officials' free speech.

You can't be from Kansas City and not be a fan of burnt ends. It doesn't matter if you fancy Jack, Joe, Arthur or Gates, which you will need to be from KC to get that refrence, they are a staple in realm of Kansas City barbecue. A delicacy not to be missed.

A celebration of Kansas City will soon capture the eyes of the nation. The Parade of Hearts is a massive public art project, symbolizing love and unity. One of the artists is opening her heart to help others heal.For Brooke Jiskra, inspiration came from pain."Really, all of my art as an artist is going to be dedicated to my sister who had been a victim of COVID-19," Jiskra said.

Grandview to add a $21 million bond to April ballot

By John Sharp By a unanimous vote last month the Grandview Board of Aldermen is asking voter approval on April 5 for a no tax increase $21 million bond package that includes up to $12.4 million in improvements to city streets, bridges sidewalks and parking areas.

KANSAS CITY, Kan. - The History Channel show "American Pickers" are returning to Kansas. According to the Got A Pick Facebook page, the pickers will be on the road and heading to Kansas and Nebraska in April 2022. American Pickers is a reality TV series that explores the fascinating world of antique "picking" and Americana.

CONTAGIOUS. NOW THAT THEEW N FACILITIES OPEN IN BLUE SPRINGS THE CURLING CLUB EXPECTS MORE AND MORE PEOPLE TO MECO OUT AND TRY IT OUR HOPE IS THAT WE SEE CURLING GROW INHE T KANSAS CITY AREA EXPONENTIALLY RIGHT NOW. THERE ARE 100 MEMBERS ALL AGES FROM 9 TO 74.

The food industry has always been home to James Chang. Born in Taipei, Taiwan, and spending his childhood in many cities across the U.S., the forty-two-year-old general manager of Waldo Thai was more or less raised in his grandmother's rice shop, the noodle factory where his dad was employed and multiple American-Chinese restaurants where his family worked.

The Kansas City Star is expanding its investigative team, adding more firepower to its deep accountability journalism that brings to light wrong-doing and seeks to improve the lives of everyday people in our communities and across the region. Three reporters will join the team, bringing with them expertise in coverage of business, law enforcement and judicial matters.

"It starts on a very base level - using your hands to work with raw soil," said Jessica Teliczan. "It lowers your stress levels, it makes you feel safe - it makes you feel like you're tapping into something that humans have been doing for hundreds of thousands of years."

State of the bees: Almost half were lost a year ago

After last year's cold snap, Marty Hansen of Belton opened up his hives to discover he had lost 40 percent of his honey bees. Even for a beekeeper like Hansen with decades of experience, the harsh cold spell took its toll on his hives and so many others in the area.

KANSAS CITY, Mo. - The King of Country is grabbing his boots and cowboy hat to return to the concert stage. George Strait announced he would return to GEHA Field at Arrowhead Stadium Saturday, July 30. While Strait has played in Kansas City more recently, it will be the first time he's been at Arrowhead since 2001.

Worlds of Fun to open in April for 2022 season

KANSAS CITY, Mo. - Worlds of Fun has announced its opening date for the 2022 season. The Kansas City amusement park plans to open on April 30 for its 49th season, according to a social media post. It's not clear when Oceans of Fun will open at this time.