Don't mistake this for hateration, because I honestly don't care . . .

It seems to me that a great deal of the animosity directed toward Missouri Senator Josh Hawley might be because he looks like a founding member of Cobra Kai. 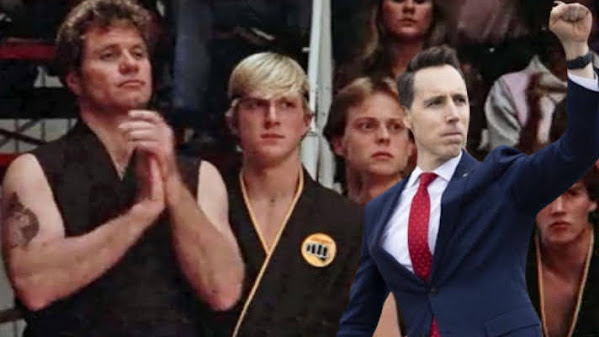 We don't share his ire for "big tech" which most people don't understand is more closely connected with BOTH sides of government infrastructure than they would possibly dare imagine.

Nobody cares that you're tweets are mostly ignored and the vast majority of online discourse merely serves as a distraction to keep the plebs indoors fighting shadow puppets rather than going outside where political discourse has REAL implications and consequences.

Nevertheless, in this quick post we take a peek at the triumphs and travails of Missouri's junior senator and most of his recent adventures . . .

U.S. Rep. Vicky Hartzler scored a major victory on Saturday in her quest for Missouri's open Senate seat, winning the endorsement of U.S. Sen. Josh Hawley in the crowded GOP primary. Hawley made the announcement at the Missouri GOP's annual Lincoln Days event in St. Charles.

"What my colleague from Missouri is doing is making us less secure because he's holding nominees," Shaheen said following Hawley's objection. "He's complaining about the problems we have in Russia and Ukraine and he's making it worse because he's not willing to allow those nominees who can help with that problem to go forward.


Why Josh Hawley is being slammed as 'grossly unfit' for office

As 2021 got underway, Sen. Josh Hawley did not find himself in a good position. After the Missouri Republican helped take the lead in trying to overturn President Joe Biden's victory, Hawley was briefly seen as a political " pariah."