Over the weekend there was a local media push to pick the new Kansas City Chief of Police by way of a Zoom call.

Luckily, the Police Board Of Commissioners has the final say over that decision.

However, the reality of municipal rules & regs hasn't stopped so much political posturing.

An inconvenient fact might have her second guessing one of her statements over the weekend . . . 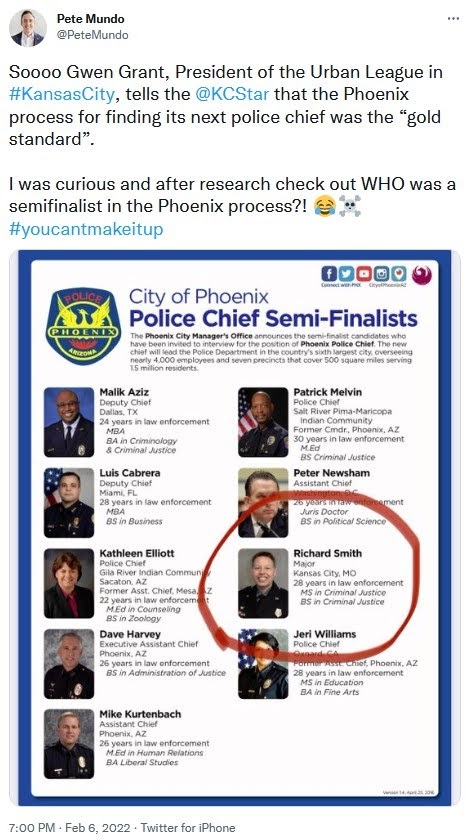 Pete Mundo discovers that the embattled Kansas City Police Chief Smith is at the top of the list for the Phoenix job.

What we don't like about coverage of the local selection process is the myth that the voting public doesn't get a say . . .

The Police Board is appointed by the Guv . . . Remember that he beat his Democratic Party challenger by nearly 20 points. Even better, he toppled his competition in a year when Prez Trump served as the boogeyman who tarnished GOP incumbents across the nation.

The Mayor is a member of the police board and he's elected by the people of Kansas City.

THERE IS, IN FACT, ALREADY DEMOCRATICALLY ELECTED LOCAL CONTROL OVER THE KANSAS CITY POLICE BOARD!!!

The arguments for "local control" have always been unpopular for a lot of reasons but, this time around, mostly because . . .

STL "won" control of their police and suffered one of the worst murder spikes in their history immediately after the so-called victory.

The push for "local control" is really an argument for "CITY HALL CONTROL" . . .

So far residents aren't very confident how 12th & Oak has run the water department or public works . . . More power over life and death would be a mistake according to the overwhelming majority of local voters.