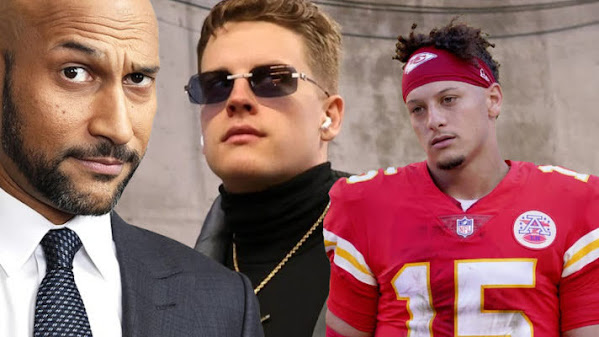 One of the top comedians in the nation didn't offer any mercy to Kansas City's favorite football superstar at a recent celebrity bash.

PATRICK MAHOMES SUFFERED MOCKING SO BRUTAL THAT HIS FANS ARE RUSHING TO HIS DEFENSE VIA SOCIAL MEDIA!!!

Actually, the joke is rather tame.

However, this is the first time the super star has been anything but a media darling. And the playful teasing doesn't look like much fun.

Check the fashion reference clowning the Bengals QB and the cutting remark directed at our hometown hero . . .

“This outfit is so mind-blowing, Patrick Mahomes saw a picture of this outfit at halftime and forgot how to play football,” Comedian Keegan-Michael Key said. Key’s joke was then followed up by a close-up camera shot of Chiefs tight end Travis Kelce, who was in attendance for the awards show but did not look amused by the joke.

The NFL Honors - an event in which the NFL's yearly award winners are announced - took place on Thursday, February 10. Comedian Keegan-Michael Key was the host of the event and added in plenty of jokes while maneuvering his way through the ceremony.