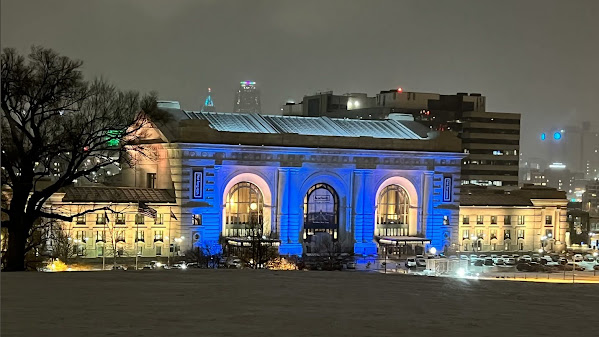 Tonight, here's the word from a remarkable Kansas City building that was forged by war . . .

"Tonight, Union Station joins landmarks across our country and around the world in lighting in blue and yellow as a statement of solidarity with Ukraine."

I have my doubts and it should be clear that most residents of this town don't care one way or another . . . Or at least not until the Russkies come marching down I-35. I don't care how many nukes they have, they wouldn't make it halfway down The Paseo.

The old school train station also glows blue at night when the Royals manage to win a playoff game once in a generation.

With disgust and horror, Kansas Citians with friends and family in Ukraine have watched the coverage of the Russian invasion."One day they're living life and they're happy and the next day evil comes into their lives," said Martin Bosch, who has close friends in Ukraine. Bosch lives in Mission.

KANSAS CITY, Mo. - As soon as the sun goes down, glaring, orange streetlights switch on, illuminating Kansas City roadways. But skyglow and smog can blanket the night sky, outshining the stars, the moon, and even the flashing lights of airplanes gliding up above.


There's Something Fishy About All Of This . . .

When Drunken Fish closed its doors in mid-February, it left a sushi-shaped hole in Kansas City's Power & Light District. But thankfully that sushi void will soon close when Blue Sushi Sake Grill opens its second location just down the street from Drunken Fish's former location Later this year the sushi joint-known for turning responsibly...

Yeezy Proves That ANYBODY Can Be Replaced

Kanye West's newest love interest Chaney Jones was every inch the Kim Kardashian clone as she hit the beaches of Miami on Wednesday. The influencer was practically twinning with Kim as she frolicked in the waves wearing a very cheeky swimsuit and pair of massive neon tint sunglasses.

Putin waves nuclear sword in confrontation with the West

WARSAW, Poland (AP) - It has been a long time since the threat of using nuclear weapons has been brandished so openly by a world leader, but Vladimir Putin has just done it, warning in a speech that he has the weapons available if anyone dares to military means to try to stop Russia's takeover of Ukraine.


Last Word From Lost Cause OR Future Harvard Professor . . .

KYIV, Feb 25 (Reuters) - Ukrainian President Volodymyr Zelenskiy vowed on Friday to stay in Kyiv as his troops battled Russian invaders who are advancing toward the capital in the biggest attack on a European state since World War Two. Russia launched its invasion by land, air and sea on Thursday following a declaration of war by President Vladimir Putin.

Biden makes decision on Supreme Court nominee, with announcement as soon as Friday

President Joe Biden has reached a decision on his first nominee to the Supreme Court, people familiar with the selection said Thursday, with his historic selection of the first Black woman to serve on the nation's highest court set to be revealed as soon as Friday.

Taste Of The Old School

The Spaghetti Joints of Kansas City

As is usual when I've finished a big piece, I've got lots of leftover clippings, anecdotes and ideas. Such is the case with last week's piece on early Asian restaurants, Noodle Joints: Cheap, Delicious and a Moral Hazard, where I have so much left over that it would take another ten thousand words to use it all up.


For Our Beloved Night Owls

While most people are fast asleep, some ultra-introverts are going about their lives, reveling in the quiet and solitude. They challenge a core assumption of psychology: that all humans need social connection. Imagine it's nighttime. You slip under the covers and turn out the light.

The Royals' Bullpen Will Be Something to Watch in 2022

The 2022 Major League Baseball season is temporarily on hold due to negotiations on a new collective bargaining agreement. As a result, fans are hoping for a resolution to get their fix for baseball as soon as possible. Before the lockout occurred, the Kansas City Royals had holes to fill within their roster, including their bullpen.

Amid school bus driver shortage, local driver has been on the road for 50 years

INDEPENDENCE, MO (KCTV) -- School districts across the country and in the Kansas City metro have struggled the past two years to hire and retain bus drivers. Local districts like Independence have had to put on multiple hiring events and offer special incentives, such as sign-on bonuses, to attract new drivers.

Cold start, but temps will head in the right direction Friday