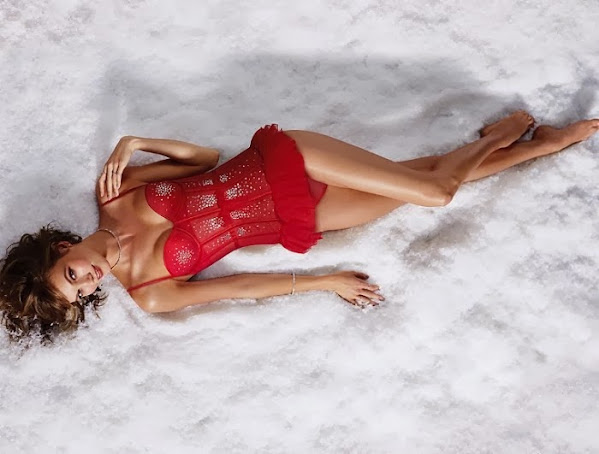 We top this post with tribute to hottie Karlie. Her days at the iconic Victoria's Secret panty brand are bygone but we respect her legacy now that company has fallen upon hard times.

And all of this inspires us to check pop culture, community news and top headlines for the midday.

Posted: Updated: KANSAS CITY, Mo. - While a number of Kansas City area school districts made the move to close or go to virtual learning ahead of Wednesday's winter storm , museums and other attractions around the metro are also closing for the day.

Kansas Citians woke up to see several inches of snow, but the storm brought far less than the 9-12 inches predicted by the National Weather Service. Schools and many businesses closed Wednesday, while others still hit the streets for cleanup or to continue their daily routine.

By Abby Hoover The Paseo Gateway Initiative has been in the works since January 2016 when the U.S. Department of Housing and Urban Development (HUD) executed a five-year Choice Neighborhoods Implementation Grant for $30 million, along with $109 million in local investment through 30 local partners.

The national Civil Rights Trail now runs through Kansas City's Negro Leagues Baseball Museum. Kansas City will be the third stop in Missouri for the trail, which follows key moments and locations in the Civil Rights movement across the United States.

The parent company of Worlds of Fun and Oceans of Fun received a $3.4 billion offer from SeaWorld Entertainment Inc. to buy the amusement park owner. According to reports in The Wall Street Journal , SeaWorld (NYSE: SEAS) offered to pay around $60 a share in an unsolicited, nonbinding proposal for Cedar Fair Entertainment Co.

TikTok personality Emira D'Spain is celebrating becoming the first black transgender model to work with Victoria's Secret. Emira - better known on social media as XOXOEMIRA - has produced a Valentine's Day TikTok in collaboration with the lingerie brand. Her clip shows how to enjoy Valentine's Day without a significant other.

President Joe Biden has formally approved additional US military deployments to eastern Europe, and the Pentagon is expected to announce Wednesday morning that the troops will deploy "in the coming days," US officials told CNN.

Donald Trump will charge top-paying guests $250,000 to attend a "Take Back Congress Candidate Forum" at his Mar-a-Lago resort in Florida this month - with proceeds going to his own Super Pac, rather than Republicans who will actually try to take back Congress.

ABC News suspended "The View" host Whoopi Goldberg for two weeks after she said the Holocaust was not about race, the network said Tuesday. In a statement, Kim Godwin, president of ABC News, called Goldberg's comments "wrong and hurtful." "While Whoopi has apologized, I've asked her to take time to reflect and learn about the impact of her comments," Godwin said.

Officials in Canada have called for an end to an "unlawful" truck blockade near the US border, amid mounting tensions between protesters opposing Covid health restrictions and local residents. The standoff near the Alberta border town of Coutts has entered its fifth day, with dozens of trucks blocking access to a key highway used to enter the United States.

LONDON, Feb 2 (Reuters) - The world's first human challenge trial in which volunteers were deliberately exposed to COVID-19 to advance research into the disease was found to be safe in healthy young adults, one of the companies running the study said on Wednesday.

The pair of siblings posed in front of a poster displaying the logo of the jukebox musical at the Neil Simon Theatre, with Prince, 24, in a grey suit and Paris, 23, in a red paisley dress. As seen on Paris's Instagram Story, she traveled to New York for the event, and hung out with her older brother ahead of showtime.

The Chiefs went as far as Patrick Mahomes could take them

The Kansas City Chiefs find themselves at home wondering what could have been a week after winning one of the greatest games we've ever witnessed. This one hurts, and it's going to be a while before the sting subsides.


The Strawberry Swing Valentine's Pop-Up at The Truman

Strawberry Swing's first official pop-up of 2022 comes to The Truman on Sunday, Feb. 6 from 10 a.m. to 4 p.m. The Valentine's Pop-Up features 30+ makers and love-themed creations.

The iconic face of Katz Drug Store - the famed retail operation that grew from the streets of Kansas City to eventually become CVS - is set to return to its hometown thanks, in part, to a pair of unlikely neon sign restorationists.


Snowfall Round One Complete

First Alert: First round of heavy snow expected in Kansas City through mid-morning

Hide Transcript Show Transcript YOU. CODY: INSIDE IS THE PLACE TO BE .NI:CK THIS IS A WINTER STORM ENTIRELY DIFFERENT. ONE ISTH MORNING, THEN ANOTHER ONE LATE THIS EVENING IONT THURSDAY MORNING. KANSAS CITY IS GOING TO PICK UP THE HIGHEST SNOWFALL AMOUNTS OUT OF THIS WINTER STORM WITH A FIRST ROUND.

Khruangbin & Leon Bridges - B-Side is the song of the day and this is the OPEN THREAD for right now.