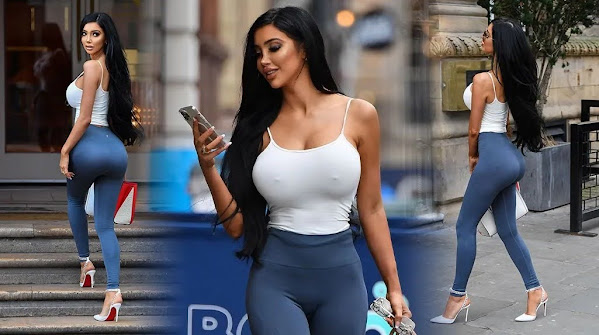 Right now a Brit hottie captures our attention as we take a peek at pop culture, community news and top headlines . . .

'This is about opportunity': Show MO Act would re-establish film tax credit in Missouri

KANSAS CITY, MO. (KCTV5) --- Bills in both the Missouri House and Senate supporting the "Show MO Act" are moving forward. The bills would re-establish the film tax credit that ended in 2013. Kansas City has its own film incentive, but the 10 percent rebate doesn't stretch beyond city lines.

Independence leaders say more than one officer got overtime for construction

INDEPENDENCE, Mo - Some Independence council members are upset after learning of overtime misuse within the city's police department. They say more than just one officer received overtime pay for a construction project. That's not the only thing causing frustration.

KANSAS CITY, Mo. - A Kansas City, Missouri, woman was struck and killed while walking on an interstate in southern Missouri over the weekend. According to the Missouri State Highway Patrol, the crash happened in the eastbound lanes of Interstate 44 at mile marker 173.8 in Phelps County at 6 a.m.

"She died a hero": Local man credits dog for saving his life during house fire

A Kansas City man lost everything, including his best friend, when his home was lost to a fire a few weeks ago. He says the fact he survived is a

CHLOE Khan stripped off for a racy shoot at a petrol station - but she once looked very different. The one-time wannabe singer is now a far cry from when she appeared before X Factor judges in 2010, covered head-to-toe in fake tan.

Another weekend of protests against Canada's Covid-19 mandates saw around 200 arrests in the nation's capital as authorities moved to end the weekslong demonstration, towing vehicles and going after protesters' pocketbooks with financial penalties.

The first public option health plan in the U.S. struggles to gain traction

With prospects dim for the U.S. to adopt a single-payer Medicare-for-All program, health care reform advocates turned instead to an insurance plan designed by the government that could compete with private insurance plans sold on the health care exchanges.

Trump's "days are numbered"-Kirschner predicts ex-president to be indicted

Some American federal holidays are fairly simple and celebrated by everyone, such as Independence Day and Thanksgiving. Others are controversial, like Columbus Day. And then there is the case of the third Monday of February.

ecades after the installation of a color barrier in professional baseball, one of the nation's top Black athletes - Jackie Robinson - stood on a Major League field for a tryout. Infield practice, batting practice, fungoes - he did it all, including some memorable shots against the wall in left field.

KANSAS CITY, Mo. - For over a decade, Stephen Reneau has been chasing a puck and a dream. "I've been refereeing for, I want to say, 14 years now, and I used to be a manager at Pepsi Ice Midwest out in Overland Park.

Arrowheadlines: Data proves that Patrick Mahomes is among league's best at avoiding sacks

PFF: Bills' Josh Allen was top NFL QB at preventing sacks | Bills Wire According to the football analytics outlet, Allen was the NFL's best at preventing pressures from becoming sacks last season. Per their findings, only 10.6 percent of pressures he faced turned into sacks.

Temperature May Climb To 70 Today

Hide Transcript Show Transcript AFTERNOON AND IT'S NOT JUST A TE MPERATURE CLIMBING BUT THE DEW POINT OR THE MOISTURE THAT'S CLIMBING AS WELL. SO IT MIGHT EVEN HAVE A LITTLE BIT OF A SPRING FEEL TO IT TODAY TO GO ALONG WITHHE T 70 DEGREE THIS AFTERNOON INCREASING CLOUDS THIS EVENING A SLIGHT CHANCE OF A SHOWER OR A RUMBLE OF THUNDER, ESPECIALLY SOUTHEAST OF KANSAS CITY.

"James K. Polk" - They Might Be Giants is the song of the day and this is the OPEN THREAD for right now.