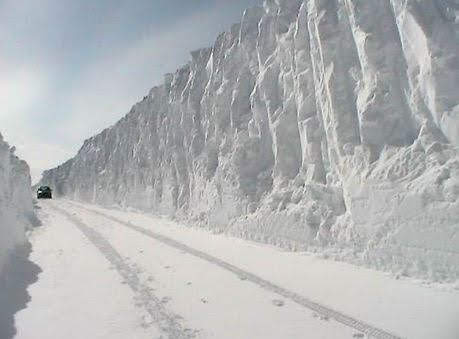 Okay, it's not quite as bad as this lead photo suggests . . . But close.

Streets are dangerous and unicorns are more likely on local neighborhood streets than snow plows.

Here's a peek at the best report from this afternoon . . .

Crews closed Interstate 49 over the noon hour after the driver of a tractor trailer lost control and jackknifed in the southbound lanes near Peculiar.

Interstate 70 in the Blue Springs area proved to be hazardous all morning long. Three crashes involving multiple tractor trailers and vehicles in the eastbound lanes of I-70 east of Adams Dairy Parkway forced emergency crews to close the highway. The highway didn't reopen until after 9 a.m., three hours after the crash.

Less than three hours after I-70 in Blue Springs reopened, it closed again because of another crash in the same area.

I-70, I-49 close due to crashes and treacherous conditions

KANSAS CITY, Mo. - The snow that fell on the Kansas City area plagued the Wednesday morning rush hour and continued to cause issued for drivers into the afternoon. Crews closed Interstate 49 over the noon hour after the driver of a tractor trailer lost control and jackknifed in the southbound lanes near Peculiar.

Hide Transcript Show Transcript OF CONFIDENCE WHEN WE ARE IN A LOW. BRIAN: AND IT'S STILL NOT OVER. WE STILL HAVE TO ADDRESS WHAT LLWI HAPPEN FURTHER EAST AND SOUTHEAST. LEBER CREWS HAVE BEEN TALKING ABOUT THE SUNSNEHI HELPING MATTERS AND THE TEMPERARETU IS STILL 18. NDWI CHILL'S ARE DOWN CLOSE TO ZERO.