An iconic Kansas City entertainment district suffers from the long-term problems worsened by the pandemic and racially charged protest/rioting.

THE COUNTRY CLUB PLAZA IS DYING AND NOW BIZ PEOPLE AREN'T AFRAID TO TALK ABOUT THE DEMISE OF THE ENTERTAINMENT DISTRICT!!!

The Internets has made it much harder to turn a buck in every retail endeavor but the Plaza has offered a better experience than suburban strip malls and because of that it has sparked jealousy from our rural neighbors living out in the middle of lifeless fields. 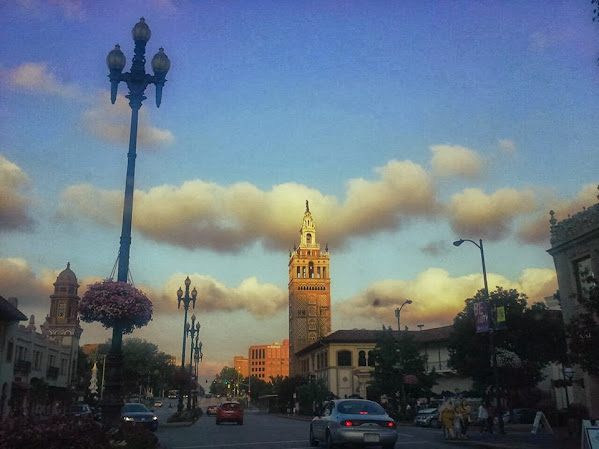 For years people had worried that youngsters and their shenanigans would chase away customers. Now, in hindsight that fear was unfounded.

It took weeks of sustained and targeted rioting to so badly damage Kansas City's most beloved destination.

Heck, even the Mayor visited the plaza a few times to shout "no justice, no peace" along with the roaring crowds.

The domino theory is a geopolitical theory that was prominent in the United States from the 1950s to the 1980s which posited that if one country in a region came under the influence of communism, then the surrounding countries would follow in a domino effect.

That never really happened, however, the closing of so many retail outlets occurs almost weekly and so this economic distress might be even more important than so much political chatter about the fate of a Eastern European sh*thole country . . . To paraphrase a former American President.

Accordingly, we quote this passage the offers a survey of the damage . . .

Recent losses include such big-name brands as Michael Kors, Kate Spade and Brighton Collectibles. Local home décor and furnishings retailer RE: is about to go dark, leaving behind a 21,274-square-foot space at 4704 Wyandotte St. The former t.Loft space, which sits on a prime corner spot, hasn't been filled since the local eatery opted to not renew its lease in 2020 because of business challenges.

"As an owner, I've never been more worried about the Plaza," Drake Development LLC President Matt Pennington said. "You see all the big names going away. It's going to have a domino effect because big names draw in big names. Additional people will fall out. ... I'm passionate about this. I'm living it. I'm breathing it every day, and it's tough to watch."

Read more via www.TonysKansasCity.com news link behind a paywall but might actually be worth the price . . .

About two dozen empty storefronts line the Country Club Plaza. Recent losses include such big-name brands as Michael Kors, Kate Spade and Brighton Collectibles. Local home décor and furnishings retailer RE: is about to go dark, leaving behind a 21,274-square-foot space at 4704 Wyandotte St.

Big picture preview of so many "dark stores" now on the Plaza and throughout the Greater Kansas City metro area . . .

The uptick of grocery delivery apps led to the rise of "dark stores": empty warehouses right in city centers. They're changing the design-and feel-of neighborhoods. Walk down a major street in Manhattan or Brooklyn today, and-wedged between a coffee shop and a FedEx shipping center-you might stumble across a storefront that looks, for all intents and purposes, empty.