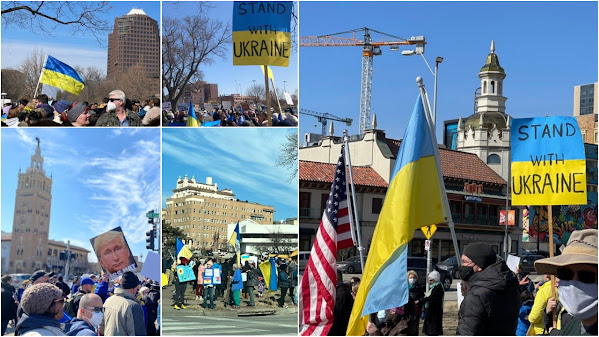 The politics of this protest are kinda sketchy inasmuch as I'm not sure this playing out as a liberal vs. progressive American debate really makes sense.

That didn't stop quite a few progressives, activists and local leaders from joining an enthusiastic gathering of people on the County Club Plaza today.

Low key reality check . . . It has been freezing all week and today was the first time the temperatures were somewhat nice . . . So that might have been another benefit of standing up for freedom, truth, democracy and Internets trolling.

"The rally, organized in just the last two days by the Ukrainian Club of Kansas City, drew support as Russian attacks against Ukraine continued Saturday."

KANSAS CITY, Mo. - Kansas Citians turned out to the fountain at Mill Creek Park Saturday to express support for Ukraine. The rally, organized in just the last two days by the Ukrainian Club of Kansas City, drew support as Russian attacks against Ukraine continued Saturday.


Rally held on Plaza Saturday in support of Ukraine

Hundreds of people showed up at the Country Club Plaza Saturday afternoon to show their support for the people of Ukraine.

Protestors gathered in Kansas City Saturday in a show of solidarity with Ukraine, crying "stop the war," offering a warning to the U.S., and publicly worrying about their families back home.