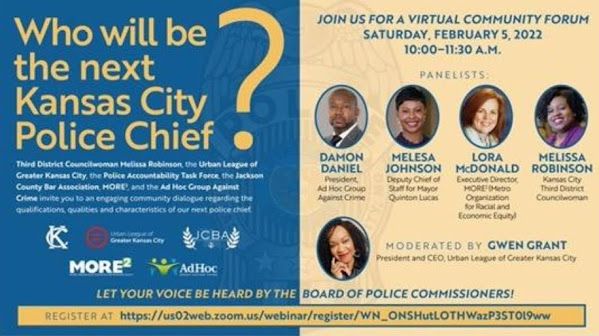 Look closely at this grainy screen cap of an upcoming community meeting and readers still might recognize constant critics of local law enforcement.

THE POLICE BOARD HAS THE FINAL VOTE ON THE NEW CHIEF AND SO THIS MEETING IS NOTHING MORE THAN POLITICAL FLEXING!!!

Still, the rhetoric and posturing is important to understand as the decision gets closer.

Social justice advocates, some religious leaders and even one council member have been calling for Smith’s resignation or removal for well over a year now, largely since the protests in summer 2020.

The forum is organized by a number of organizations including the Urban League of Greater Kansas City, the Police Accountability Task Force, the Jackson County Bar Association and the Metro Organization for Racial and Economic Equality.

Meeting to focus on hiring of next KC police chief

KANSAS CITY, Mo. - The community will come together to talk about what it wants to see in its next police chief. A virtual forum is planned for Saturday, Feb. 5 from 10 a.m. - 11:30 a.m. Chief Rick Smith announced in November that he planned to retire in the first half of 2022.