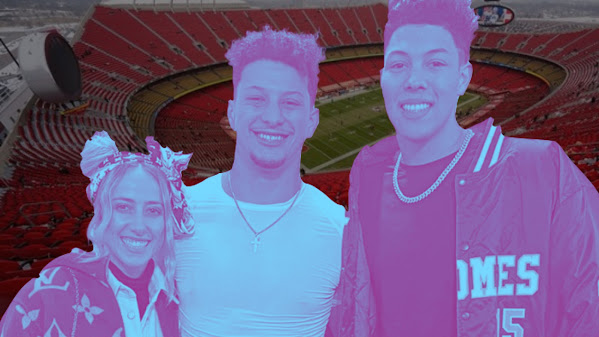 Probably showing my age this post but here's something to consider . . .

Brit spent most of the season whining about refs & the TikTok dance moves of Jackson Mahomes have endured overwhelming criticism . . . Some horrible hatred and other justified rebuke.

Here's a nice round-up of the controversy that often overshadows football for the NextGen . . .

And all of this inspires a playoff Saturday overview collection of news . . .

Kansas City Chiefs fans are hoping the team can find a way to get through the playoffs and back to a third-straight Super Bowl appearance."You know what you spent for your first car? You're going to spend more than that," said travel advisor Mark Comfort.

KANSAS CITY, MO. - As the 2021 playoffs start this weekend around the NFL, the coaching carousel continues to revolve for many rebuilding teams. Zooming with reporters ahead of his team's Wild Card match up versus the Pittsburgh Steelers Sunday, Kansas City Chiefs head coach Andy Reid admits he's hoping a team hits the jackpot with Eric Bieniemy this offseason.

KANSAS CITY, MO (KCTV) --- The Kansas City Chiefs are kicking off their playoff run this weekend by hosting the Pittsburgh Steelers. For those still looking for seats, fans might notice a surprise when looking at the price. Ticket experts say during the regular season, tickets were at an all-time high.


Chiefs running back Clyde Edwards-Helaire ruled out for Sunday

"It wasn't quite as good as we thought it might be."Kansas City Chiefs coach Andy Reid said in a press conference Friday that while they had hoped running back Clyde Edwards-Helaire could return to the field for Sunday's AFC Wildcard game, a nagging shoulder injury has ruled him out.

Super Bowl odds 2022: Packers, Chiefs open playoffs as favorites to win Super Bowl 56 | Sporting News The Chiefs, who were the favorites during most of the offseason and before the season, have climbed back up to the No. 2 spot.

KANSAS CITY, Mo. - The Community Blood Center is offering Chiefs Kingdom a chance to win tickets to the team's playoff match against the Pittsburgh Steelers. Anyone who donates blood at the center will be entered to win two tickets and parking to the game on Sunday.


Prairie Village church working to lift up the Chiefs, help the hungry

When it comes to supporting the Kansas City Chiefs, a church in Prairie Village is religious about it.The team is always on the prayer list and often mentioned on the church sign out front.