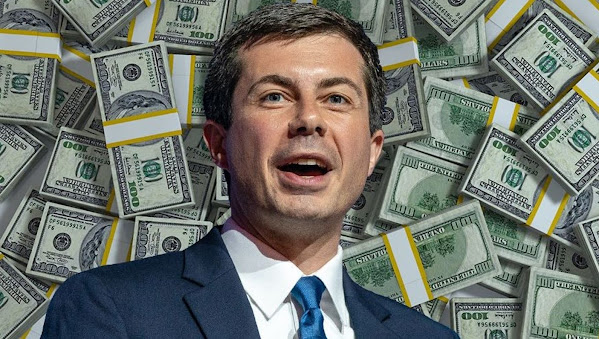 Until the midterms, cash giveaways will continue to rule the discourse of the nation.

And then we'll probably get back to biz as usual wherein only corporations take handouts with no challenge from the public.

Nethereless, here's the postscript reporting on today's visit from one of the top power players in the Beltway . . .

Buttigieg visited Kansas City, Kansas, on Friday to discuss how the $1 trillion bipartisan infrastructure bill will modernize infrastructure across the U.S.

On the topic of a recent tragedy in Pittsburg and plans for this administratrion in the countdown to the midterms . . .

"The bottom line is that this shouldn't happen in the United States of America,” Buttigieg said. “We are seeing before our eyes in very blunt terms, what the cost can be of disinvestment in our bridges."

The secretary originally came to the Kansas riverfront with 3rd District Congresswoman Sharice Davids to talk about the infrastructure law that went into effect in November.

Most importantly the secretary said the bill’s going to create what he called ‘good paying union jobs,’ saying tens of thousands of bridges need repair across the country. He says more than 1,000 bridges in Kansas are in poor condition. More than 2,000 are in that case in Missouri.

"When they close, or when they need to be restricted because of load limits, or worse when a bridge collapses, it impacts everyone," he said.

With the Rock Island Bridge as a backdrop, U.S. Transportation Secretary Pete Buttigieg on Friday touted the Biden administration's $1 trillion infrastructure bill to fund improvements such as roads, bridges and public transportation in places like Kansas City, Kansas. Much of the money will go toward repairs for ailing bridges like the Central Avenue Bridge overlooking the Kansas River.

KANSAS CITY, Kan. - U.S. Transportation Secretary Pete Buttigieg was in Kansas City, Kansas, on Friday to talk about the benefits and outlook of the new $1.2 trillion infrastructure law. It will deliver $550 billion of federal investments over five years and benefit roads, bridges, airports and climate-conscious initiatives.

KANSAS CITY, KS (KCTV) --- An early morning bridge collapse in Pittsburg injuring more than 10 people is putting the spotlight on infrastructure throughout the country, including the metro. On a scheduled visit to Kansas City, Kansas Secretary of Transportation Pete Buttigieg said, "it is a very blunt reminder," of the reason to invest in American roads and bridges.

KANSAS CITY, Kan. - While along the Kansas riverfront near the Rock Island Bridge Friday afternoon, U.S. Transportation Secretary Pete Buttigieg weighed in on the bridge collapse that happened in Pittsburgh earlier that morning. A port authority bus was on it when it collapsed, sending a number of people nearly 150 feet down before they were rescued.

KANSAS CITY, Mo. - During his visit to Kansas City, Kansas, on Friday, U.S. Transportation Secretary Pete Buttigieg got to try some of the area's best barbecue. Buttigieg was in KCK to highlight President Joe Biden's Bipartisan Infrastructure Law. After delivering a speech at the Rock Island Bridge, he visited Slap's BBQ located at 553 Central Avenue.