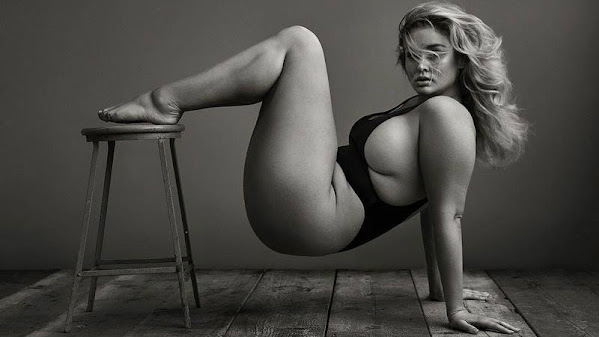 There are a ton of fat jokes here that I'm too lazy to find . . . I'd rather admire hottie Hunter and realize the cruel reality that not all curves are created equal.

But slightly less important than chubby white broads who love to share their political opinions is a truism that should be mentioned: Most people know that fad diets don't work.

The political angle of "rejecting the culture" along with anti-corporate spin makes a recent prog blog missive just a bit more current and loathsome.

Check the premise of people who need to create an existential crisis around eating out of boredom or curbing sugary, salty and savory treats which help Americans swallow all of their genuine emotions . . .

"The numbers on the scale no longer dictate my feelings because I rarely weigh myself. Best of all, my entire focus is no longer on losing weight. Being satisfied with life is now my goal, including spiritual growth, intriguing work and fulfilling relationships."

Recently, Tucker took apart this seemingly health approach to eating . . . And didn't mention that his waistline has shifted noticably during the course of his career as well.

For this new year, follow my example and say 'no' to diet culture - Kansas Reflector

The Kansas Reflector welcomes opinion pieces from writers who share our goal of widening the conversation about how public policies affect the day-to-day lives of people throughout our state. Linda Ditch has been a freelance writer for two decades. It's late January. The time where, traditionally, most people give up on their New Year's resolutions.