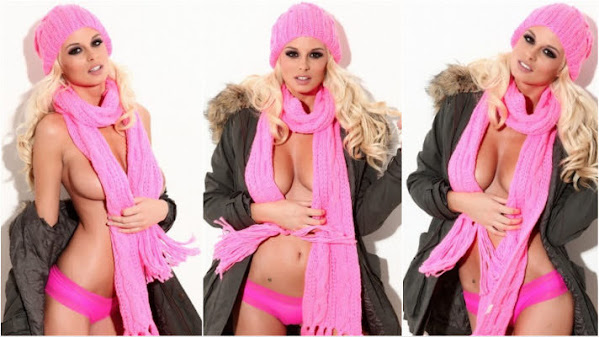 Right now we take a wayback peek at hottie Rhian in her winter gear as we check pop culture, community news and top headlines.

by: Heidi Schmidt Posted: / Updated: KANSAS CITY, Mo. - A taste of Kansas City plans to return to the parking lots of GEHA Field at Arrowhead Stadium this spring. The Kansas City BBQ Festival, also known as KCQ, is scheduled to take place May 6-8, 2022.

INDEPENDENCE, MO (KCTV) -- Multiple people were injured when a suspect fleeing from police drove a pickup into oncoming traffic and caused a multi-vehicle crash today. According to the Independence Police Department, the crash happened in the area of Noland Road and Lynn Court. That is just north of Noland Road and I-70.

JOHNSON COUNTY, KS (KCTV) -- Johnson County finally has a way to report at-home COVID antigen test results. If you test positive on an at-home test, go to this website (jocogov.org/reportresults) to report the result. You'll be prompted with a form to fill out. Reporting the result is voluntary.

KANSAS CITY, Mo. - If you need something on your car repaired or serviced, expect to wait. The supply chain crisis is fueling problems for the auto repair shops and they can't keep up with demand. KC Complete Auto Service is one of those shops.

The Missouri House on Wednesday passed a congressional redistricting map that would keep the state's current congressional makeup, with six Republican seats and two Democratic ones. Representatives voted 86-67 to pass the map, with some Republicans joining all Democrats in voting against the bill.

TOPEKA, Kan. (AP) - Republican legislators in Kansas are pursuing a redistricting proposal that would remove Democratic voters from the Kansas-City area swing district currently held by the state's only Democratic member of Congress. The plan unveiled Tuesday also would move Lawrence, home to the main University of Kansas into the sprawling and largely rural district covering western and central Kansas.

KANSAS CITY, MO - As always, there's a lot of excitement tied to Kansas City Restaurant Week, which continues through Sunday, Jan. 23. But for the roughly 200 restaurants who choose to take part, the week involves a fair amount of risk too. Herrera's Tenderloin Grill is one of those spots.

Her social media accounts are littered with sizzling lingerie snaps. And Rhian Sugden, 35, treated fans to another sensational photo on Instagram this weekend as she posed in a bright orange lace bra after a pamper session. The model showed off her jaw-dropping cleavage in the plunging underwear as she posed seductively on her bed.

President Joe Biden said he will likely have to break up his stalled plan to invest in social programs and climate policy, and that he believes Congress can still pass parts of it. "I'm confident we can get pieces, big chunks of the Build Back Better law signed into law," the president told reporters on Wednesday.

The Supreme Court on Wednesday denied former President Donald Trump's request for a stay of a lower court mandate that hundreds of pages of his presidential records from Jan. 6 be turned over to the congressional committee investigating the attacks. The vote was 8-1. Justice Clarence Thomas would have granted the application.

If President Joe Biden's press conference Wednesday was supposed to inspire confidence, it failed - horribly. Even though he spent most of it clearly calling on reporters from a list of "safe" questioners provided by his staff, he stumbled and bumbled and all too often made no sense at all.

Biden faces the press as his agenda hits headwinds

President Joe Biden held a formal news conference Wednesday as he marks the end of his first year in office with a stalled legislative agenda, hospitals overwhelmed with Covid patients and the looming threat of a Russian invasion of Ukraine.

A TEAM of citizen scientists and astronomers has found a planet the size of Jupiter that NASA missed. The team announced the discovery of the exoplanet, which floats outside of our solar system, last week in a new study published in The Astronomical Journal.

Jay-Z, Meek Mill, Kelly Rowland and Killer Mike are among the star names arguing for a change in New York law that would prevent rap lyrics being used as evidence in criminal trials. The vocalists, joined by Fat Joe, Yo Gotti, Robin Thicke and more, have signed a letter urging lawmakers in New York state to back the proposed change and uphold freedom of expression.

Employees at Starbucks are no longer required to be vaccinated against COVID-19. Roughly a week after the Supreme Court reversed President's Biden workplace vaccine mandate, the coffee chain is following suit, according to The Associated Press. "We respect the Court's ruling and will comply," Starbucks Chief Operating Officer John Culver wrote in a memo to employees.

Looks like we can probably rule out that surprise Samantha cameo...

When it was completed in 1883, the home of Cornelius Vanderbilt II, once located at 1 West 57th St. in Manhattan, was something to behold. Hardly a house, the Châteauesque mansion along Fifth Avenue in New York City boasted six stories, a drawing room, an art gallery and a reception area.


Politicos Save The Planet?!?

There was a heated debate Tuesday in Independence where two city council members proposed moving millions of dollars in solar panels off the former Rockwood Golf Course.The council voted 4 to 3 to delay a final vote while city staff do more research.For years there have been sore feelings over the closed Rockwood Golf Course.

A newly launched program by The Porter House KC is aimed at providing small business owners with as much as $5,000 for their back office, equipment cost, rental assistance or general system needs, detailed Dan Smith. "We're really excited about this Alchemy Sandbox program.

KANSAS CITY, Mo. - Kansas City Chiefs fans who can't get their hands on one of the more than 70,000 tickets to Sunday's AFC Divisional Game now have a new place to watch. The Chiefs plan to take over Country Road Ice House in the Power & Light District this weekend during the following times: Friday - 4-6 p.m.

By Abby Hoover Abdul Hatimi starts his day in the kitchen, preparing breakfast for the variety of customers who will soon trickle into his restaurant on Independence Avenue. What used to be a steady stream of immigrants looking for a taste of home, businessmen venturing out of downtown and Kansas Citians with adventuring taste buds has dwindled throughout the COVID-19 pandemic.

Local arts group No Divide KC. // Courtesy of ArtsKC ArtsKC announced its list of 51 organizations receiving Mission Support Grants. The council prioritizes a progressive funding program for small to mid-size organizations within the region. Due to generous funding support, ArtsKC received an increase in the overall average grant amount for all awardees.

Bitter cold weather will be here through Friday

Elton John, Dua Lipa - Cold Heart is the song of the day and this is the OPEN THREAD for right now.