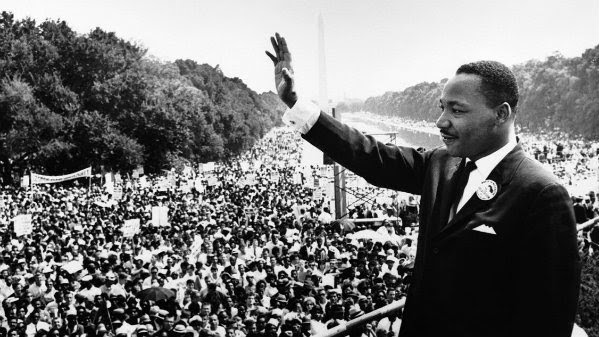 We could rant about some of these news notes but some of the reports are worthwhile . . . Instead, we leave it up to readers to decide and share these apropos news items for MLK day.

Kansas City residents have the chance to step up and serve as volunteers on the annual Martin Luther King Jr. holiday by helping the Kansas City Public Library (KCPL) collect donations for hygiene kits. For the third year in a row, KCPL's AmeriCorps VISTA Project is collecting donations of travel-sized personal care items for a Hygiene Kit Drive.

The Shawnee Mission Post will not publish any new content today, Monday, Jan. 17. We are setting aside some time to rest and reflect on the legacy of Martin Luther King, Jr. We will be back with new content on your community in northeast Johnson County on Tuesday.

In the new book "Letters to Martin" by Randal Jelks, who is a professor of African American and American studies at the University of Kansas, the reader gets the sense they're observing an intimate conversation between two scholars.

OPINION AND COMMENTARY Today, most Americans celebrated the life and work of Dr. Martin Luther King Jr., founding president of the Southern Christian Leadership Conference, the distinguished nonviolent direct action civil rights organization. I came to adulthood under the tutelage of the giants of the SCLC, icons from the civil rights movement such as Dr. King, Fred Shuttlesworth, Ralph Abernathy, Dorothy Heights and Joseph Lowery.


Martin Luther King, Jr. had a vision for Kansas City and beyond. Are we ready for it?

OPINION AND COMMENTARY As Kansas City embarks upon another year of celebrating the life and legacy of Dr. Martin Luther King Jr., our nation is embroiled and agitated by the aftermath of an insurrection at the nation's capitol a year ago, legal proceedings implicating the former president in that insurrection, the deadliest and most wide-ranging global health emergency in decades, and a political party that continues to block and resist laws to secure and guarantee voting rights to citizens of the most established democracy in the world.


'A lot of fighting to do': Kansas City mayor speaks on Martin Luther King Jr. Day

LAWRENCE - As the 36 th annual observance of Martin Luther King Jr. Day nears on Jan. 17, two University of Kansas professors are available to comment on its significance - always, but particularly in the wake of challenges to American democracy.