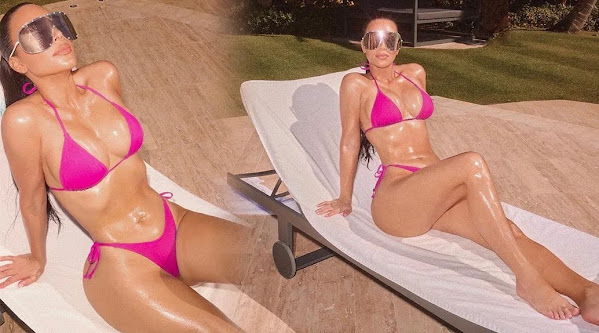 Right now it feels downright balmy compared to how cold and miserable it's supposed to get this week. Accordingly, we admire a thirst trip from hottie Kim K along with pop culture, community news and top headlines . . .

Ahead Of The Local News

Will there be a higher number of Kansas Citians calling in sick today? Not with COVID, but with "Chiefs fever?" The Chiefs heartbreaking overtime loss to the Cincinnati Bengals put an end to Kansas City's Super Bowl hopes for another year.

4.6-magnitude earthquake in Oklahoma felt as far north as the Kansas City area

The U.S. Geological Survey recorded a 4.6-magnitude earthquake Monday morning in northern Oklahoma.USGS officials said they recorded the earthquake around 11:10 a.m., about 4.5 miles northwest of Medford. Viewer reports state the quake has been felt as far away as Kansas City, Kansas. The U.S.

Hide Transcript Show Transcript CODY: WHO WILL REPRESENT YOU IN CONGRESS MOVING FORWARD? IT IS ALL ABOUT THE VOTES BUT A LOT OF IT DEPENDS ON WHERE YOU LIVE AND THE MAKEUP OF YOUR CONGRESSIONAL DISTRICT. THAT IS CHANGING BECAUSE LAWMAKERS IN MISSOURI AND CANDACE HAVE TO DRAW UP NEW MAPS THIS YEAR BASED ON POPULATION.


Kansas Carves Up The Dotte

TOPEKA, Kan. - Top Republicans pushed their congressional redistricting plan through the GOP-dominated Kansas Legislature without much trouble Wednesday with an expected court battle looming over whether it would go too far in hurting the state's only Democrat in Congress. The House's sends Democratic Gov.


Case Not Closed On Plague

As COVID-19 infections continued to rise in Kansas City, Missouri, in January, the KC Municipal Court took a step back and returned to virtual operations for a few days. The statistics behind the decision were grim: About 20% of all court workers were infected or isolating due to close contact with an infected person.

On Friday, the SKIMS mogul, 41, posted a series of pictures on Instagram showing off her glistening body in a fuchsia string bikini and oversized sunglasses in what appeared to be a throwback to her Bahamas getaway with Pete Davidson, 28, earlier this month. "Still spamming vacay pics 💕," she captioned the images.

The United States and its allies are stepping up the pressure on Russia, warning the country faces "the mother of all sanctions" in the standoff over Ukraine and vowing to confront Moscow publicly at the United Nations on Monday.

Conroe, Texas - Former President Donald Trump is dangling the prospect of pardons for supporters who participated in the deadly January 6 storming of the U.S. Capitol if he returns to the White House. "If I run and if I win, we will treat those people from January 6th fairly," Trump said Saturday night during a rally in Conroe, Texas.

At Texas rally, Trump all but promised a racially charged civil war if he's indicted | Will Bunch

For a nation that's awakened every morning for nearly two years to a Groundhog Day of pandemic and paranoia, the scenes from Donald Trump's latest comeback rally on Saturday at a fairground in the East Texas flatlands of Conroe could certainly numb the American mind with an overwhelming sense of déjà vu.

Kamala Harris, then vice-president elect, drove within yards of a pipe bomb left outside the Democratic National Committee on January 6 2021 and remained inside for nearly two hours before the bomb was found, it was reported on Monday. Harris's proximity to the bomb was known previously, but not how close or for how long.

Police warned of "traffic, noise and safety issues" in Ottawa as a vaccine mandate protest continues.

Joe Rogan defended himself on Sunday but vowed to "try harder" to offer more balance on his podcast in his first public response to the growing protest facing Spotify over Covid-19 misinformation. Rogan's comments came after the streaming service announced that it would add a content advisory to any podcast episode that discusses the coronavirus.

There is now more optimism that the worst of the coronavirus pandemic may be ending -- and as other nations lift certain Covid-19 restrictions, some public health experts question whether US counties and cities should consider easing their guidance on mask-wearing or social distancing, as well.

Florida is so cold iguanas are falling out of trees

The National Weather Service Miami-South Florida warned the public on Sunday that immobilized iguanas could fall out of trees due to unusually cold temperatures across the region. "Iguanas are cold-blooded. They slow down or become immobile when temps drop into the 40s (4-9 Celsius).


Confessions From Cuck Of The Walk

Arrowhead Stadium has played host to some incredible national anthem renditions in recent years. But the one the Kansas City Chiefs and Cincinnati Bengals got to enjoy before today's AFC Championship Game was particularly special. As Grammy Award-winning singer-songwriter Ashanti sang The Star-Spangled Banner, the crowd at Arrowhead Stadium joined in.

As Folk Alliance International prepares for its 2022 conference (after taking a COVID year off), we can expect to see a mix of live performances and virtual shows as musicians and other music professionals gather from across the country and beyond.

For more than two years Kind Food was nestled in the cramped confines of a shipping container in the Iron District. When they opened in late 2019, owners Jonelle and Phillip Jones thought it was the perfect space to try out their brand of creative vegan fare.

KANSAS CITY, MO (KCTV) -- The T-Mobile Center is back to hosting major music acts, and country star Luke Bryan is set to hold a concert there Sept. 8, the venue announced Monday morning. The 7 p.m. concert is part of Bryan's Raised Up Right Tour 2022, and will also include Riley Green and Mitchell Tenpenny.

A Winter Storm Watch has been issued for the Kansas City area ahead of what's expected to be a snowstorm with heavy snow totals later this week. Keep your eyes on the forecast for Tuesday night into Wednesday, and Thursday morning as we track shifts in this storm track.

Japanese Breakfast - Slide Tackle is the song of the day and this is the OPEN THREAD for right now.