Kansas City politicos have the future planned out quite nicely.

Our KICK-ASS BLOG COMMUNITY helps us unpack a great deal of hype behind the scenes deals.

If Lucas wins a 2nd term as Mayor, he will endorse McManus to be his successor.

No other KCMO Councilmember appears to be raising significant funds to challenge Lucas in 2023.

He's a peek at council dude McManus and his plans for a bright future . . . 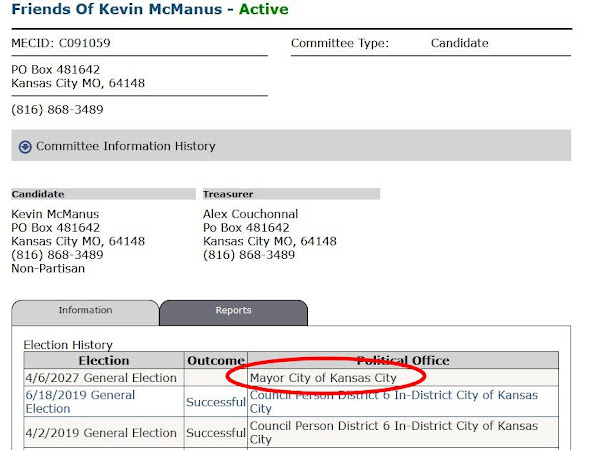 Mayor Q still lists his residence near 18th & Vine on his campaign finance reports . . . That's a different story then what he has shared with his social media audience. Of course there is time to amend and we're sure his heart is pure.

The reality here is that Mayor Q will likely win another term without any serious challenge and mean Internets comments aren't enough to fight the power of an incumbent.

There is nobody outside of the Kansas City Star offices who EVER considered the Mayor a serious contender for Senate.

Mayor Q is truly unpopular with police, the Northland and taxpayer hawks . . . And so anybody brave enough to challenge him might find some semblance of support in a long shot bid.

Anybody who has ever worked with Mayor Q knows that he has a propensity for saying one thing and then doing something completely different.

KANSAS CITY, Mo. - Mayor Quinton Lucas told an audience on a Facebook chat Tuesday night, he plans to run for a second term as Kansas City's mayor. "I like being mayor, I'm planning to run for reelection," Lucas said during the community Facebook chat on Tuesday. "Look, I love Kansas City.

KANSAS CITY, Mo. - Kansas City, Missouri Mayor Quinton Lucas said he intends to run for re-election as mayor in 2023. That announcement came out of a Facebook Live chat Tuesday night. Lucas has been online a lot this week, waiting out his COVID-19 isolation.