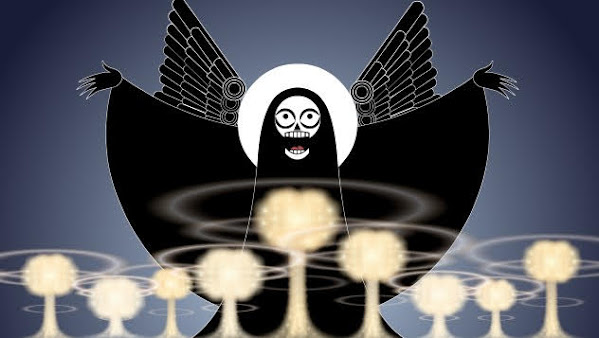 Late night inspiration thanks to a great drawing from artist Nina Paley.

Sorry but during a plague and impending war . . . Kansas City football fans worshiping death is a bit much.

THE "GRIM REAPER" TAG FOR PATRICK MAHOMES IS ONE OF THE WORST KANSAS CITY SPORTS QUOTES WE'VE SEEN THIS SEASON!!!

Of course he's a great coach but his silly death quote deserves an eye-roll and so much more . . . Why?

Because Patrick Mahomes might be a real life shining light for this cowtown. His play has been inspiring and he seems like a nice enough guy . . . Which is rare for ballers at the top of their game and multi-millionaires in general.

The "death" tag aimed at opponents playing a children's game is overblown.

Sadly, it's hard to underestimate local football fans so . . . Of course the meme is catching on . . .

KANSAS CITY, MO (KCTV) -- The number 13 might be the Chiefs new lucky charm after last night's win over the Bills, and today fans have a new rallying cry: "Be the grim reaper." The phrase was inspired by Head Coach Andy Reid's postgame comments, in which he recalled his advice to QB Patrick Mahomes on the final drive of the fourth quarter.

KANSAS CITY, MO (KCTV) -- Sunday night's unforgettable win during the wildest NFL game of the season, is inspiring companies to create Chiefs gear as fast as possible. Both Patrick Mahomes and Travis Kelce said Sunday night's game is one they will remember for the rest of their lives.


Patrick Mahomes is well-suited for his new nickname, The Grim Reaper

Patrick Mahomes has built a legacy in just a few seasons. After defeating the Buffalo Bills in one of the greatest, if not the greatest AFC Divisional Round in playoff history, "Showtime" Mahomes is no longer. The nickname that will now and forever belong to Patrick Mahomes is, "The Grim Reaper."