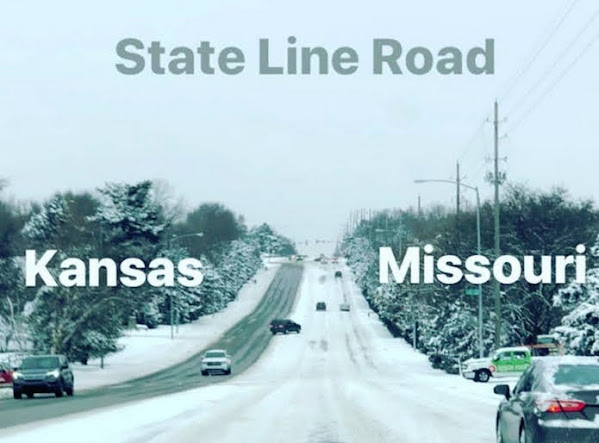 In this post, because we didn't hit our posting goals during the work week, we check hyper local neighborhood reports from across the metro amid the Winter weather and tough road conditions . . .

KANSAS CITY, Mo. - 8:45 a.m. | State-operated COVID-19 testing events in Missouri have been canceled in the Kansas City area, according to the Missouri Department of Health and Senior Services due to weather conditions. Before heading to a testing event, the community is asked to check the event's status on theDHSS website .

A Kansas City favorite pizza place in Westport has reopened as a deli."The feedback has been phenomenal," said Jason Harper, director of operations for Guy's Snacks in Kansas City.Guy's is known in Kansas City for its potato chips, making them here since 1938."I figure it would kind of be a layup to sell some sandwiches at this location," Harper said.Now, Guy's Snacks has opened its first deli in Westport in the back of Kelly's Westport Inn."Is January a good time to be opening up a deli?

'We are running out of options': 3rd Johnson County district asks families to prepare for closures

KANSAS CITY, Mo. - A third school district in Johnson County is asking families to prepare for potential closures or remote learning due to staffing shortages stemming from COVID-19. As news surfaced of other districts issuing similar warnings, the Blue Valley School District said members of the district began to ask about the possibility.

Kansas City Public Schools has regained full accreditation after a decades-long struggle. But while the district is celebrating the news, Superintendent Mark Bedell says they "have a lot of work to do." Plus, workers providing care for people with intellectual anddevelopmental disabilities have been quitting in droves during the pandemic.


Next Up For Credentials?!?


Wasting Away On Taxpayer Dime

Anticipated as a possibility last year, builders spearheading a large-scale Kansas City, Kansas, development anchored by multiple sports and recreation facilities are returning to local officials, asking for more public assistance in connection with plan changes. In exchange, the Unified Government of Wyandotte County/Kansas City, Kansas, will put the onus on Homefield LLC to bring even more private investment to the site.


Life Lesson On The Clock

KANSAS CITY, Mo. - Kansas City Public Schools are pushing for flexible school hours. KCPS Superintendent Dr. Mark Bedell said students should be able to come to school at various times of the day according to their schedule, to meet their needs. Bedell said the goal is retention.

Plans are underway to connect a Civil War-era commercial port on the Missouri river and a Kansas City, Kansas, park where Lewis and Clark once camped. KCUR reports that the proposed Northeast Kansas City, Kansas, Heritage Trail came to life when the Groundwork Northeast Revitalization Group partnered with the Unified Government to apply for a grant from the Mid-America Regional Council.

KANSAS CITY, Mo. - Masks will now be required for students, staff and visitors in Raytown C-2 School District buildings beginning on Tuesday. On Monday evening, the board of education voted to implement the mandate. It will be in effect until Feb. 15.

MO DHSS cancels testing event in KC due to weather

KANSAS CITY, MO (KCTV) -- The Saturday testing clinic hosted by the Missouri Department of Health and Senior Services has been canceled due to snow. The clinic, located at 4501 Emanual Cleaver II Blvd., normally runs from 10 a.m. to 6 p.m. on Saturdays.

Midwest coal-fired power plants are among the country's worst polluters, but they don't break EPA rules

On clear days, Patricia Schuba says she can see clouds forming from the stacks at the Labadie Energy Center from her home three miles away. "They're dirty clouds," Schuba said. "They don't look like normal clouds." The clouds are emissions from Missouri's largest coal-fired power plant, located about 45 miles west of St.

COLUMBIA, Mo. - The University of Missouri has named a choral hall after musician Sheryl Crow who graduated from the school in 1984 with a degree in music education. The Columbia Missourian reports that the newly named hall is located inside of the Jeanne and Rex Sinquefield Music Center.

TOPEKA, Kan. - In Kansas's 2023 Fiscal Year Budget, there is room for investing in higher education. "So the budget is in a completely different position, not just revenues. Revenues are clearly in a very good position right now, but the entirety of the structure of the budget is different, it's more stable," said Adam Proffitt, budget director for the Kansas Division of the Budget.

While several prosecutions are pending and at least two have been resolved with guilty verdicts , many prosecutors are reluctant to file charges - and some do not think the games are illegal at all. He pointed to the fact that a gambling company was convicted, fined and had their machines destroyed in Platte County last year.

Sam Graves: Our rural hospitals are in a crisis

(By Sixth District Congressman Sam Graves) Our rural hospitals are in a crisis. This isn't a new problem, but the COVID-19 pandemic has certainly made it worse. For years, healthcare costs have gone up while Medicare reimbursement rates have gone down. That's turned the screws on hospitals everywhere.

by: AP Wire Posted: / Updated: JEFFERSON CITY, Mo. - A Missouri House panel advanced a congressional redistricting plan Wednesday that is projected to keep Republicans solidly in control of the state's delegation to Washington without reaching for an even more dominant advantage. The proposed U.S.

While there seems to be a fried chicken joint on every other block these days, we could still use more, right? Kansas City, we're in luck-and the newest chicken restaurant to come to town plans to bring the heat. Founded as a pop-up restaurant in California in 2017, Dave's Hot Chicken now has about 40...

It's tech that can help BBQ novices, competitive pitmasters and restauranteurs alike, Ted Conrad said. "This is a hobby for most people, and it's easy to get excited," he said. "It's a fun device, but it is something that makes cooking better. Temperature is key."

OVERLAND PARK, Kan. - Wednesday night a city committee focused on public safety will review a proposal to launch a pilot program allowing more residents of Overland Park, Kansas, to have backyard chickens. Currently, residents must live on three or more acres to have chickens without a special use permit.

One Kansas City-area restaurant serving up French fare secured its regular spot on online reservation platform OpenTable's top 100 restaurants in America list for 2021. OpenTable, which allows consumers to book restaurant reservations online, named Prairie Village's Café Provence among the best in the U.S. for the eighth time in 10 years.

KANSAS CITY, Kan. - 82-year-old Lillian Diaz is retiring after dedicating 52 years to Kansas hospitals. Friday marked her last day as an intensive care unit secretary at Providence Medical Center in Kansas City, Kansas. "This has been my life for so long," Diaz said. "Maybe it's time for me.

A fan favorite Chiefs tradition has returned to Union Station. Kansas City Chiefs fans can stop by and get photos with a brand new Alpha-Lit KC installation before Sunday's playoff game.The display is already open and can be accessed from 6:30 a.m. to 10:30 p.m. every day through Wildcard Weekend.

Gifts From The North

This time of year gifts of ice from our northern neighbors in Montana, the Dakotas, and Nebraska start arriving via the Missouri River. Above, the Kaw is in the foreground and is relatively ice free. The Missouri is in the background. All shots taken from Kaw Point in Fairfax, Kansas City, Kansas.

And this is ANOTHER the OPEN THREAD for right now.