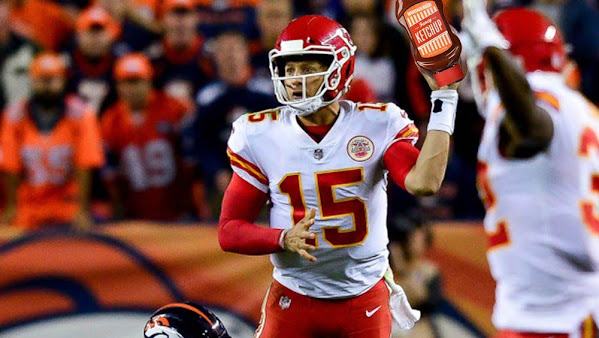 The final game of the regular season offers nothing but more reason to doubt Kansas City ballers.

Nothing about this game was decisive and the Chiefs win might have even been a fluke.

Sadly, it wasn't exciting enough to really consider and local fans are simply happy to avoid yet another embarrassing upset.

Here's our TKC collection featuring some of our favorite articles on the game . . .

Linebacker Nick Bolton's 86-yard fumble return after Melvin Ingram III darted into Denver's backfield untouched and stripped Melvin Gordon powered the Kansas City Chiefs to a 28-24 victory over the Denver Broncos on Saturday.With their 13th consecutive win over the Broncos, the Chiefs (12-5) kept alive their hopes of getting the No.


Chiefs grind out a win in Denver; currently number 2 seed in AFC

DENVER, Colo. - After a tumultuous first half where the Denver Broncos ran for 111 yards, the Kansas City Chiefs recovered in the second half to win 28-24. The Chiefs are now in sole possession of the #2 seed in the AFC playoffs and will host at least one playoff game.

Without being a loss, It's hard to imagine the Kansas City Chiefs' regular-season finale could be any more underwhelming. Trailing in a tight game for most of the afternoon, the Chiefs used an 86-yard fumble return by Nick Bolton to escape Week 18 with a 28-24 win over the Denver Broncos.

What the fuck was that, PATRICK?!? I thought NFL QBs were supposed to be a fraternity that looks for each other because they have the toughest job in sports. Don't give me that no offense line either before unfurling a 2019 Chiefs worth of offense in your very next breath.

The Kansas City Chiefs didn't look ready for the challenge provided by the Denver Broncos in Week 18, but Patrick Mahomes and company recovered just enough in the fourth quarter to be able to overcome the upstart rivals for a 28-24 victory.


Four Takeaways From the Chiefs' 28-24 Win Over the Broncos

In their final game of the 2021 regular season, the Kansas City Chiefs went into Colorado coming off a tough loss and were facing the Denver Broncos. It wasn't the prettiest of wins, but Kansas City was able to secure a 28-24 win and lock down at least the No.


Chiefs vs. Broncos Instabreakdown: an ugly win still gets the job done

The Chiefs only had three first-half possessions - but two of those drives accounted for 30 plays, 150 yards and over 12 minutes of possession time. In particular, the opening drive was kept alive with multiple third-down conversions - and two big Patrick Mahomes runs were also pivotal to sustaining the 17-play, 91-yard march.