What might be the most important news today was a minor victory for mask opponents during this "dark winter" of worsening COVID stats.

Legislator Ron Finely likely isn't going to get much blame or support for missing the vote and word is that he's not running again . . . So, while it might be hard for many people to imagine, the politics of pandemic mask slap fighting don't dominate the lives of everybody.

Only eight legislators attended the meeting. Consistent mask supporter Ron Finley was absent, and that may have had something to do with the decision not to vote on bringing back the mask mandate.

During the meeting, Jackson County Executive Frank White said he supported a mask mandate because of the number of COVID cases in the county.

"I want to make sure that we understand the seriousness of, of kids, and what's happening with our kids in our schools," White said.

The Jackson County Health Department also supported a mask mandate for schools due to the number of new cases and hospitalizations.

CHECK LEGISLATOR CRYSTAL WILLIAMS AND HER ANGRY RANT AGAINST HER COLLEAGUES AFTER THE FACT!!! 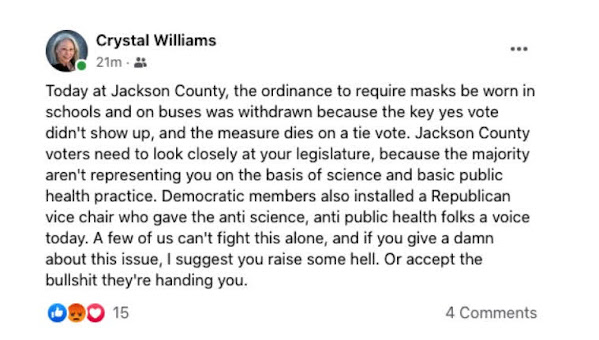 KANSAS CITY, Mo. - The Jackson County Legislature withdrew a proposed mask ordinance that could have reinstated masking requirements in schools and on school buses Tuesday morning. The measure, which would have required all students, staff and visitors to wear masks in school buildings in Jackson County, didn't have the votes to pass on Tuesday.

KANSAS CITY, Mo. - The Jackson County Legislature considered a proposed ordinance Tuesday that would have required masks in public schools. The measure was withdrawn after debate. The Jackson County Health Department did recommend a mask mandate for everyone, regardless of vaccination status, due to increased transmission of COVID-19 with the omicron variant.

A measure that would have required students under the jurisdiction of the Jackson County Health Department to mask up in class was withdrawn Tuesday after debate. Jackson County Executive Frank White Jr. said last week that he would recommend a public health order requiring universal masking for K-12 public schools in the county, and that he was sending an order to the county legislature for consideration.

by: Juan Cisneros Posted: / Updated: JEFERSON CITY, Mo. - Missouri Attorney General Eric Schmitt doubled down on his efforts to bring Missouri school districts to court for continuing to enforce mask mandates. "Last month, I informed a number of school districts that their decision to continue to enforce mask mandates is illegal and must be stopped immediately," Schmitt said.