Social media resentment has turned into something just a bit more ugly & concerning for the baby bro of Kansas City's favorite baller.

After seemingly annoying a vast array of people in the sport world & beyond . . . Jackson Mahomes is now the victim of nasty name calling.

HOMOPHOBIC SLURS AGAINST JACKSON MAHOMES ARE STUPID BECAUSE THERE ARE SO MANY REASONS NOT TO LIKE HIM!!!

Not to mention his allegedly entitled attitude at local bars. 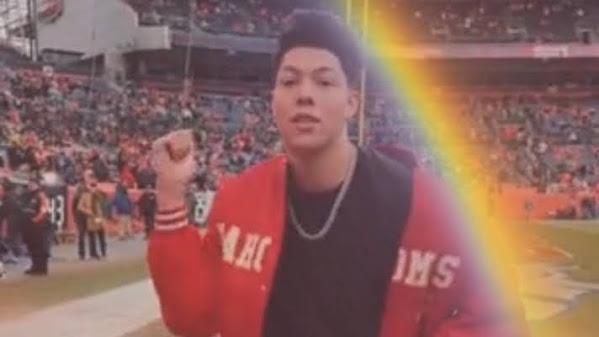 Sadly, yet again football fans are displaying a dearth of creativity . . .

Jackson Mahomes, the younger brother of Chiefs quarterback Patrick Mahomes, was the target of homophobic chants at Empower Field in Denver, where Kansas City beat the Broncos 28-24 on Jan. 8. In a Twitter video captured at the game, someone can be heard yelling, "Hey, Ma-H-o, Ma-H-o," while the camera zooms in on Jackson Mahomes standing on the sideline in a red Chiefs jacket.

An NFL fan was captured on video yelling an anti-gay slur at Patrick Mahomes ' brother before the Chiefs took on the Broncos on Sunday. The incident went down at Empower Field at Mile High in Denver ... when Jackson Mahomes and Patrick's fiancee, Brittany Matthews , were down on the field taking pregame pictures and videos.