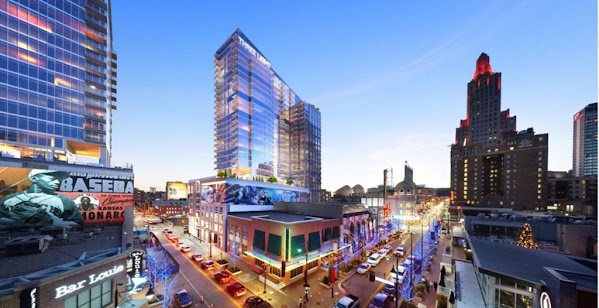 There's a bright side of this "news" item . . . Developers are sooooooo desperate that they're using old tricks to try and garner more tax breaks.

Postscript . . . On the bright side, Russ Johnson was well liked when he first ran for council but finished his political career with an EXTREMELY negative public perception and now couldn't get elected as dog catcher.

On the bright side . . . This should make locals feel just a bit sorry for this Nebraska town that's undertaking a decade old idea that didn't really do much for KC's local economy in terms of jobs.

Omaha Mayor Jean Stothert and Mutual CEO James Blackledge announced both new projects Wednesday. Mutual’s plan will change the city’s skyline with a glass high-rise that could rival the tallest in Nebraska, the First National Tower.

“It is very clear to all of us, and every developer, that parking has choked development downtown,” the mayor said. “This (the streetcar) is the solution.”

The city and developers expect the streetcar to reduce traffic along the route. The city plans to raise $306 million for the project. The streetcar is projected to cost $225 million, but another 35% of that would be set aside for a federally required contingency fund.

Read more via www.TonysKansasCity.com news link to a hack blogger lauded by every developer scumbag in town whilst asking for tax breaks . . .

(Editor's note: This article about two major developments announced Wednesday in Omaha is being published to inform CityScene readers about what other regional cities are doing to revitalize their greater downtowns. The last office tower built in downtown Kansas City was the 18-story H&R Block headquarters in 2006.