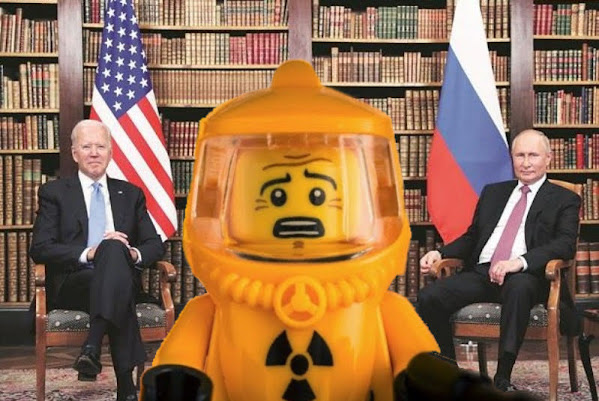 We won't pretend to understand geopolitics on this dumb-ass local blog but what we know for sure is that the impact of a Ukraine invasion by Russia will likely make life even worse in Kansas City.

Of course, if it sets off WWIII, we might not have to worry about it for too long.

Still . . . This topic might be above our pay-grade but it's still important AND THAT'S WHY our local news media is downplaying the local impact.

Tonight, misstatements from the Prez aren't calming nerves and the very likely event of an invasion will spike fuel prices which, in turn, will raise prices on everything.

Don't worry . . . There's no need to go out horde gas because we're talking about price increases for YEARS not just until the next fake news distraction or outrageous celeb scandal.

Again . . . As far as public messaging is concerned, there is simply no denying that Prez Biden has handled this crisis HORRIBLY and even the most progressive Americans are frustrated.

When Democrats take serious losses in the midterms, there won't be any way to defend him and he might be lucky if they let him retire quietly.

Still, this is just our cursory take on the crisis and tonight we share some more news items and better perspective along with inviting word from our reader community . . .

Biden predicts Putin will advance into Ukraine: 'He has to do something'

President Biden said Wednesday that he believes Russian President Vladimir Putin will advance into Ukraine, but he also tried to address Russia's main complaint, indicating that Ukraine would not join NATO in the near future. "I'm not so sure he has, he's certain what he's going to do," Biden said.

The White House on Wednesday sought to clarify President Joe Biden's comments about a potential Russian invasion into Ukraine, after Biden said the U.S. response would depend on the severity of Russia's actions.

and intense criticism over suggestions that Russia would face lesser consequences for launching a "minor" attack against Ukraine, prompting the White House to quickly try to clean up the remarks.


Russia could act against Ukraine 'at any moment', says US

The US secretary of state, Antony Blinken, has said Russia could take "further aggressive action" against Ukraine "at any moment", adding that Vladimir Putin's military intentions were still unclear as he prepared for talks with his Russian counterpart at the end of the week.

US President Joe Biden responded forcefully to reports of a wide-ranging cyberattack on Ukrainian government systems Wednesday afternoon, telling reporters that the US would respond with its own cyberattacks if Russia continues to target Ukraine's digital infrastructure.