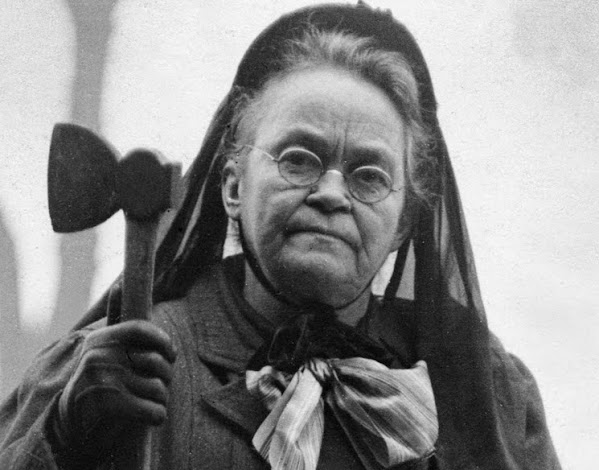 Years ago I met Gina Kaufman and teased her about changing Walt Bodine's bed pan. It's the kind of stupid joke that I often rely upon during awkward silences and this type of amateurish behavior has, thankfully, prevented me from getting a "real job" in Kansas City journalism.

Here's the lead in to an overly dramatic monologue about Carrie Nation . . .

"What we've missed, though, is the story of a disenfranchised person getting fed up and demanding more from the leaders charged with protecting her. "You wouldn't give me the vote," she said, "so I had to use a rock."

I have no idea what makes white women so angry and that's probably why my personal relationships with the ladies are often in worse shape than my career prospects . . .

Ms. Kaufman is highly educated, articulate, one of the best journalists working in Kansas City and she has likely never been in a real fight in her entire life and doesn't have any concept of violence - Political or otherwise.

Whilst TKC isn't a tough guy by any stretch of the imagination . . . One of my first experiences with bloodshed, that I've written about before on this blog, was having a stranger's brains splattered on my Air Jordans during a Country Club Plaza mini race riot in the early 90s.

As with most ethnic-y young dudes overflowing with testosterone  . . . My teen years were filled with close calls and a record breaking year for KCMO murders in 1993 culminated with several acquaintances getting gunned down. This turn of events convinced me of the power of media to influence life on local streets and, more importantly, assured me that there is no shame in being a homebody.

Another reason TKC was quickly "scared straight" . . . A neighborhood kid was sent to jail for a drive-by and word of the constant prison rape he suffered was enough to convince me that real life criminality wasn't nearly as glamorous as the movies.

And ALL OF THIS reminds me that people who have had any direct contact with gunfire, war or any kind of violent chaos DON'T ROMANTICIZE HUMAN SUFFERING.

There is no sense to be made of acts of violence, inflicting pain or threatening people with destruction doesn't ever accomplish anything and the motives of violent acts are only pieced together after the fact by smarter people who use words and not force.

I notice that in KC very often progressive white ladies who are far too quick with tough talk in order to put on a brave face against so many right-wing creepers who are VERY knowledgeable about their guns when they get stumped on civil rights laws.

Another for instance that's more fun than Internets comment flame war beef . . . A skinny old drunk lady senior citizen who used to run The Pitch would openly threaten to knock TKC out despite the fact that I could bench press her whilst she was sitting inside of her compact car if it ever came down it.

But it won't ever come down to it because I've got video games to play . . . Aaaaaaaaand, I was smart enough to walk away from a wasted youth with one important lesson: Violence in all of its forms isn't brave, heroic or glorious . . . It's stupid and a waste of time.

And so it's fair that we listen to the tales of the so-called "hatchet granny" with a bit of an eye-roll and realize that destruction of property and public beat downs from the long lost days of the Wild West seem like fun for somebody who never has and never will be in a real fight.

Check it via www.TonysKansasCity.com news link . . .

For more than a century, Carry Nation's Prohibition rampages have inspired mockery. What we've missed, though, is the story of a disenfranchised person getting fed up and demanding more from the leaders charged with protecting her. "You wouldn't give me the vote," she said, "so I had to use a rock."