For those who have already forgotten the #MeToo movement, there remains a strong local connection betwixt strident feminist advocacy and the Kansas City metro amid our dysfunctional and mostly sleazy politics.

Taylor Hirth first encountered the public eye when she helped to bring down former Missouri State Senator Paul LeVota over allegedly "suggestive" texts he sent her way when she worked as an intern.

She was tragically a victim of serial rapist and involved in a war of words with police until her attacker was ultimately prosecuted & convicted.

Police Said They Couldn't Find the Men Who Gang-Raped This Woman While Her 2-Year-Old Watched. Then Another Woman Was Raped.

Taylor Hirth and I are curled up on a leather couch at the home of her friend in Kansas City, Missouri. It is late afternoon, and the only light in the room is from the television playing a tape of Taylor, now 31, sitting in a police interview room.

Ms. Hirth is undefeated in her charges so it would be wise to take her seriously.

Surprisingly, her call out isn't generating much attention.

With the help of the finest TKC TIPSTERS we screen-capped the controversial and public statement and redacted an image of one of her family members in order to focus on the more relevant passage . . . 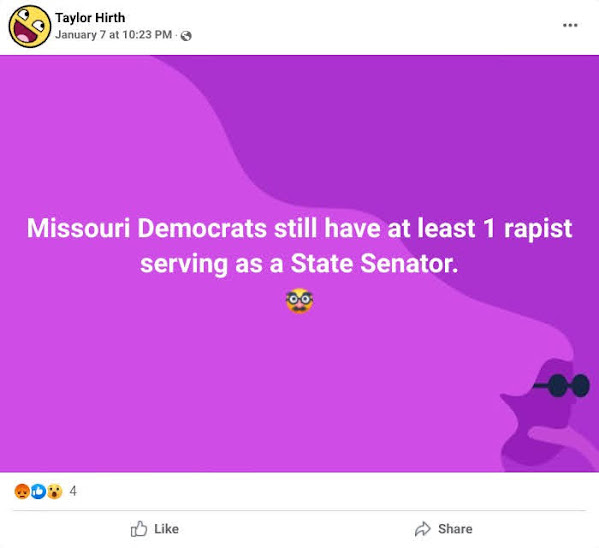 More importantly, Taylor Hirth isn't just an activist and a rape survivor. She's also a very ambitious and skilled rising star given that she recently earned a gig as a coordinator for Legal Aid of Western Missouri.

This scathing indictment from Taylor Hirth will undoubtedly impact the fortunes of the Super Minority Party and an alleged rapist lurking amongst the state senators as they struggle to remain relevant amid wave of hostile red state midterm election year legislation in Jeff City.